Perry gets big bounce, but race is still anyone's game 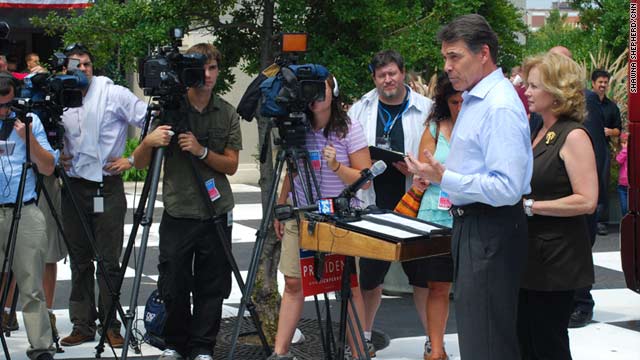 (CNN) -- In less than six months Republican presidential candidates will face off in early critical caucus and primary states and if polls are any indication at this early stage, it's fair to say Rick Perry's recent bounce shows he could be a thorn in Mitt Romney's side.

But the field is still too unsettled to dismiss anyone or crown a front-runner.

The Texas governor picked up a sizable jump in a national Gallup poll this week after shaking up the primary field when he entered the race two weeks ago. His August 13 announcement in South Carolina hijacked political headlines that otherwise would have been devoted that day to Michele Bachmann's narrow win over Ron Paul in the Ames straw poll in Iowa.

A July Gallup survey of Republican and Republican-leaning independents showed that Perry had the potential to close in on Romney, coming in second with 18%, not far behind the former Massachusetts governor's 23%.

This week's Gallup poll, taken within a week of Perry's announcement, the Iowa straw poll and Tim Pawlenty's withdrawal from the race was nearly a reversal of the July poll -- Perry jumped to the head of the pack with 29%, while Romney garnered only 17%.

Perry is considered a strong contender among key Republican subgroups. According to Gallup, older Republicans and those living in the South show strong support for him. Conservative Republicans strongly favor Perry over Romney, but liberal and moderate Republicans support the two about equally.

This puts Perry in the unenviable position of being considered a rising front-runner, and having to weather six months of attacks from all sides.

Both sides of Perry's 'jobs debate'

Conservative RedState blogger and CNN contributor Erick Erickson said Gallup's polling dispels the notion that Perry would not be able to appeal to liberal and moderate voters throughout the United States in order to beat President Barack Obama in the general election.

"[Perry and Obama] are tied among registered voters, which would more than likely put Perry ahead in likely voters. Mitt Romney still polls better against Obama and has more money, but Romney also has higher name identification," Erickson wrote on his blog. "Interestingly, as Perry's name ID goes up, his favorable ratings go up too."

But the question remains, are voters not rallying behind one candidate because they are not enthusiastic about their choices? Is there a possibility that Sarah Palin or Rudy Giuliani or Chris Christie will seize on the unsettled or divided field and enter the race?

Jeffrey Jones of Gallup concludes this analysis based on the poll released this week: Palin and Giuliani each receive about 10% of the vote when included in the nomination preference question, with Perry still holding a significant lead over Romney, 25%-14%, on this measure," Jones said.

It is also too early to dismiss White House hopefuls whose polls place them in the bottom percentile of the presidential field. Candidates will be stepping up their game in September when voters typically become more engaged in the primary process.

And you never know what gaffe or opposition research might pop up to knock any of the candidates off their path to the White House.