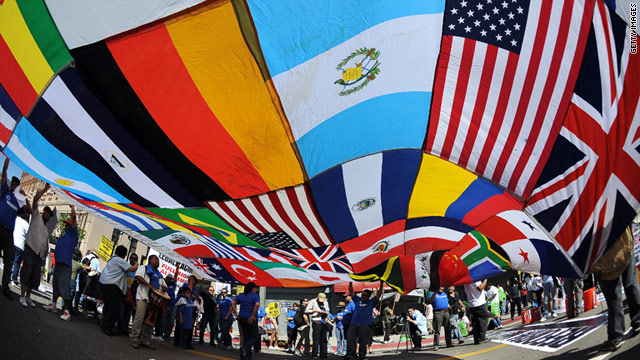 Many members of immigrant communities are confused about how the new federal guidelines will affect them.
STORY HIGHLIGHTS
RELATED TOPICS

A federal prosecutor suggested one of her clients -- a 22-year-old university student with no criminal record -- should ask to have her deportation case dismissed.

Immigration lawyers around the country hope those types of calls from federal officials will become more common under new deportation guidelines the Obama administration detailed a week ago.

The Department of Homeland Security said the government would review about 300,000 deportation cases pending in federal immigration courts. Lower-priority cases -- those not involving individuals considered violent or otherwise dangerous -- would be suspended under the new criteria.

Federal authorities are still hashing out the details of how the cases will be reviewed, a senior Department of Homeland Security official said Thursday.

"Because the working group is in the midst of designing the process for reviewing cases, no individual cases have been administratively closed or otherwise affected by the policy announced last week," said the official, who asked to remain anonymous per departmental policy.

But some immigration attorneys say they're already starting to see a difference in how their clients are treated.

A day after the guidelines were announced, Georgia attorney Charles Kuck argued in court that his clients' cases should be dropped under the new guidelines.

The clients -- two teens with no criminal records who police arrested during traffic stops -- were released from a detention center on Tuesday, Kuck said.

"These kids were detained for months. We had previously asked for their release numerous times," he said. "It was only after the memo came out that they were released."

But how widespread the policy's impact will be on the local level remains unclear.

Some attorneys say they're seeing more cases administratively closed, Pelta said, but others say local immigration officers have told them they need more guidance from the federal government before they can change course.

"The spirit of the announcement (last week) was, 'We're really serious about this,'" Pelta said.

Administration officials call it a matter allocating scarce resources more efficiently. Critics call it backdoor amnesty, a way to push through policy changes that conservatives in Congress would never agree to.

Brewer signed a state law last year requiring local law enforcement in Arizona to apprehend and help deport illegal immigrants, among other things. The U.S. Justice Department sued, arguing that only the federal government has that authority. Earlier this year, a three-judge appeals court panel sided with federal officials and against Brewer.

Federal judges have also blocked similar measures in Utah, Indiana and Georgia. And the nationwide skirmish between state and federal officials over who controls immigration enforcement has showed no signs of slowing.

A federal judge heard arguments Wednesday challenging an Alabama measure aimed at cracking down on illegal immigration that is scheduled to go into effect September 1.

But some say the new federal guidelines could undercut the state initiatives.

"It will make them meaningless, because even if Georgia goes ahead and arrests every 18-year-old kid for driving without a license, ICE is likely to release them back into the community," Kuck said.

In the meantime, many members of immigrant communities are confused about how the new guidelines will affect them.

The American Immigration Lawyer Association issued an advisory after Napolitano's announcement, warning that the guidelines don't grant amnesty and don't create a program people can sign up to join.

"There is NO 'safe' way to turn yourself in to immigration and there is NO guarantee that your case will be considered 'low priority,'" the advisory says. "ANY person who comes into contact with immigration authorities may be arrested, detained or even removed."

"My phone lines have flooded because people are getting the wrong message. This is like the old game of telephone," said Carolina Antonini, an immigration attorney in Georgia.

Antonini stressed that the new policy applies only to deportation cases already in the system, and how it will play out remains unclear. But even so, she said, it marks a significant change.

"The shift of mentality is important," she said, "because it gives me the hope that at least I know people are going to be considered. There's a chance that everybody will be looked at as a human being before a blanket decision is made."

But people on both sides of the immigration debate say the new guidelines don't fix America's immigration problems -- a fact Napolitano acknowledged in her letter last week.

"The only way we're going to have a permanent solution that can't change depending on who's in the White House is for Congress to take definitive action," Pelta said.

Mark Krikorian, executive director of the Washington-based Center for Immigration Studies, which favors stricter immigration control, said the guidelines showed the Obama administration was abusing its power and shirking its responsibility to enforce immigration laws.

"This does, in fact, increase the incentive for states to try to act on their own," he said.