U.S. has nearly doubled air attacks on Libya in past 12 days 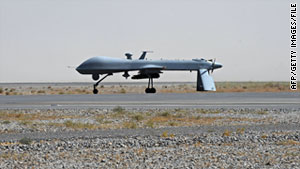 The Pentagon says attacks by armed Predator unmanned planes have risen to 1.4 a day.
STORY HIGHLIGHTS

Washington (CNN) -- As the rebels in Libya push closer to ending the regime of embattled Col. Moammar Gadhafi, U.S. warplanes have been increasing their attacks on government positions as part of the NATO campaign.

New numbers released by the Pentagon on Monday show that the number of U.S. air attacks on Libyan air defenses, ground forces and other targets has nearly doubled over the past 12 days, compared with air attacks in the first 132 days of the NATO mission.

The Pentagon release indicates that attacks by armed Predator unmanned planes have more than doubled to 1.4 attacks a day, compared with .6 attacks a day between April 1 and August 10.

The cost to the U.S. taxpayers for America's share of the Libyan mission, known as Operation Unified Protector, is approaching $1 billion.

As of July 31, the Pentagon had spent about $896 million. The U.S. had also sold its allies and partners in Operation Unified Protectors more than $220 million worth of ammunition, spare parts and fuel.

The Pentagon was also authorized to deliver up to $25 million worth of nonlethal aid to Libyan civilians. So far, it has used about $12.5 million of that authority by shipping Meals-Ready-To-Eat, boots, tents, uniforms and protective gear. The Defense Department was able to tap its own stockpiles for this aid.

Since June, the Pentagon has not received any more requests for additional nonlethal aid to be sent to Libyan rebels or civilians.