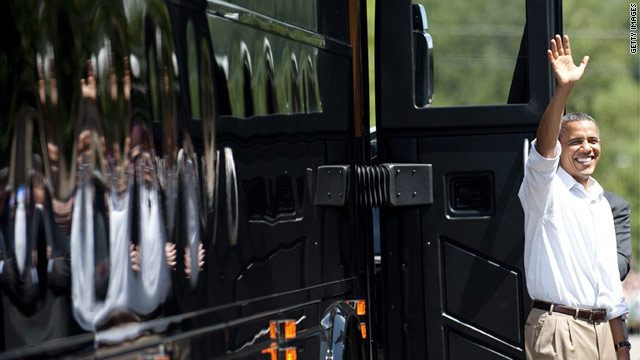 CNN's Wolf Blitzer takes you along for the ride as President Obama continues a Midwest bus tour. Watch his interview with the president at 5 p.m. ET Tuesday on "The Situation Room."

Appearing before a crowd of farmers and small-business owners in the presidential battleground state of Iowa, Obama called on Congress to help boost an anemic economy by passing an extension of the payroll tax cut and a new road construction bill, among other things.

"America is going to come back from this recession stronger than before," the president declared. But I "need your help sending a message to Congress" that "it's time to put politics aside and get something done," he said.

What's next for 2012 presidential race?

What do we need to fix the economy?
RELATED TOPICS

The president is scheduled to discussed a number of political and economic issues during a one-on-one interview with CNN's Wolf Blitzer on Tuesday afternoon.

Among other things, the administration is pushing $350 million in additional Small Business Administration funding to rural small businesses over the next five years. The White House is also working to promote greater venture capital investment in rural startups and using more than 2,800 U.S. Agriculture Department offices nationwide to help publicize job opportunities.

Loans from the Department of Health and Human Services are being made available to help recruit staff members to 1,300 rural hospitals.

The initiatives are based on recommendations from the White House Rural Council, which Obama created in June to report on rural America's economic climate.

Obama's trip to Peosta, Iowa, followed stops in both Minnesota and Iowa on Monday. On Wednesday, the president will host a pair of town hall forums in his home state of Illinois.

The first family is then scheduled to depart for a vacation in Martha's Vineyard, Massachusetts, on Thursday.

Obama's remarks on Tuesday echoed comments he made Monday, in which he slammed partisan politics and called on lawmakers to prioritize economic growth.

"The problem we have is not with our country. The problem is that our politics is broken," he said at a town hall meeting in Decorah, Iowa.

"There are a whole host of ideas that we could be implementing right now that traditionally have had bipartisan support. The only thing that is preventing us from passing them is that there are some folks in Congress who think that doing something in cooperation with me, or this White House, that that somehow is bad politics."

The president said he will release a detailed plan to boost the economy, create jobs and control the country's deficit when Congress returns to Washington in September.

He began his tour with a town hall meeting before a supportive crowd at a riverside Minnesota park in Cannon Falls.

"He's spending taxpayers' dollars on a bus tour disguised as some kind of economic event for the country when we all know that it's a campaign event paid for by the taxpayers," Preibus said.

Earlier, the Republican National Committee issued a "briefing book" on the trip made to resemble one produced by the administration in which it mockingly described the trip as "a totally non-political taxpayer-funded administration event that just happens to criss-cross several battleground states critical to the president's reelection."

GOP presidential hopeful Mitt Romney's campaign posted a message to his website that was similarly critical.

"During his Magical Misery bus tour this week, it is unlikely President Obama will speak with unemployed Americans, to near-bankrupt business owners or to families struggling to survive in this economy," the statement reads. "He is more interested in campaigning in swing states than working to solve the economic crisis that is crushing the middle class."

Administration officials defended the trip last week, saying it was not political in nature. It was meant as an opportunity for Obama to visit with residents in their own communities to talk about national economic policy, they said.

"That isn't just an appropriate thing for a president to do, it's something that a president should do," Josh Earnest, Obama's principal deputy press secretary, said Friday.

At the Cannon Falls meeting, Obama hit on recent themes blaming economic problems in part on turmoil in the Mideast, debt problems in Europe and the earthquake and tsunami in Japan, but he said the biggest problem was intransigence in Washington, particularly among Republicans unwilling to accept any tax increases to help solve the nation's budget problems.

He also touched on education, health care reform and other topics.