Pawlenty drops out of presidential race 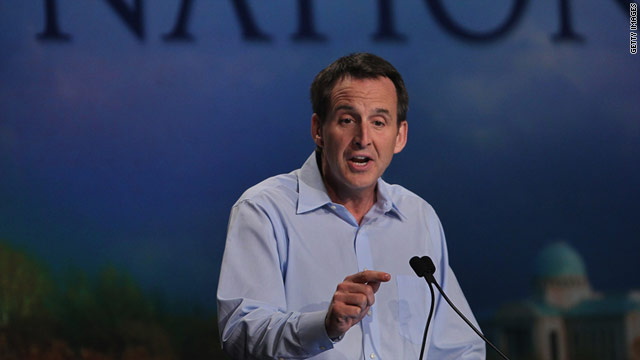 Ames, Iowa (CNN) -- Former Minnesota Gov. Tim Pawlenty abandoned his bid for the GOP presidential nomination on Sunday after a disappointing finish in the Ames Straw Poll in Iowa.

Speaking to ABC's "This Week," Pawlenty said his campaign needed a lift in the straw poll.

"The pathway forward for me doesn't really exist and so we're going to end the campaign," he said.

Pawlenty's message Sunday was the opposite of the one he offered after the results of the straw poll came out Saturday.

"Congrats to Rep. Bachmann on her win. Our campaign needed to show progress and we did. I'm eager for the campaign ahead," he tweeted Saturday evening.

Asked by "This Week" whether he would be interested in being a vice presidential contender, Pawlenty responded, "That's not something I'm even going to consider."

Pawlenty said he might endorse a candidate down the road.

Bachmann told ABC, "I wish him well. I have great respect for the governor. We've known each other for a long, long time. And he brought a really important voice into this race. And I'm grateful that he was in. He was a -- really a very good competitor."

Six Republican presidential hopefuls on Saturday personally appealed for votes in the poll in Iowa, the first state to hold a presidential nominating contest. Results in the Iowa caucuses set a tone for the national race.

The next closest contenders were: former Pennsylvania Sen. Rick Santorum with 1,657 votes, businessman Herman Cain with 1,456 votes, and former Massachusetts Gov. Mitt Romney with 567 votes. That was slightly less than the 718 who wrote in the name of Texas Gov. Rick Perry, who declared his candidacy Saturday and wasn't even on the ballot.

Former House Speaker Newt Gingrich was on the ballot, but his cash-strapped campaign did not have a formal presence at the straw poll and he only got 385 votes.

Casualties of the straw poll are nothing new to presidential politics.

In 2007, Former Wisconsin Gov. Tommy Thompson dropped out the day after placing sixth in the poll.