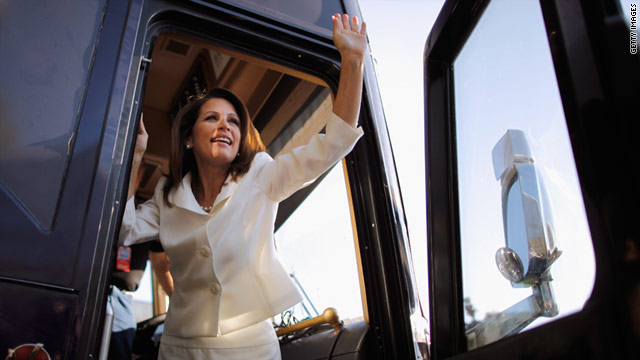 Then, speaking to ABC's "This Week," he made the official announcement. "The pathway forward for me doesn't really exist and so we're going to end the campaign," he said.

Pawlenty finished a distant third in the poll, behind Bachmann and Texas Rep. Ron Paul, who finished within one percentage point of each other.

Bachmann -- who called the results a sign that hers is "the team that can't be beat" -- told CNN's "State of the Union" on Sunday, "People sent a message to President (Barack) Obama. They said, 'We are done with your policies, we want something very different.' "

While the poll is influential in setting a tone for the race, particularly for the nation's first presidential nominating contest -- the Iowa caucuses -- it does not reflect the full picture nationally.

Two of the nine candidates on the Iowa ballot -- former Massachusetts Gov. Mitt Romney and former Utah Gov. Jon Huntsman -- skipped the contest. Huntsman is avoiding the Iowa caucuses completely, while Romney's advisers are carefully watching the state and might make a move if they see an opening.

Pawlenty pulls out of presidential race

Bachmann on the tea party and compromise
RELATED TOPICS

Romney tweeted his congratulations to Bachmann, and added, "Look forward to crossing paths on the campaign trail."

Meanwhile, Texas Gov. Rick Perry tried to shift some attention away from the Iowa results Saturday by announcing his entry into the presidential race at a meeting of conservatives in South Carolina -- one of the first states to hold a presidential primary.

He followed with events in New Hampshire, which holds the first primary, and planned to continue on to Iowa.

Although his name was not on the ballot for the straw poll, Perry received 718 write-in votes; more than the 567 who voted for Romney.

A major Republican figure who has not entered the race remains an unknown quantity. Former Alaska Gov. Sarah Palin, the vice presidential contender four years ago, visited Iowa but has not yet announced whether she will run.

For Paul, who came in second, the poll offered an opportunity to build momentum in Iowa. His campaign described him as "surging in this race," saying the poll results "show the strength of his grassroots support and top notch organization."

While Pawlenty dropped out -- as some candidates have in previous election cycles after the straw poll -- several candidates who placed well behind him remain in the race.

Former Pennsylvania Sen. Rick Santorum's campaign said his fourth-place finish in the poll "shocked the political establishment." Saying he was "outspent by more than 10-to-1 by his closest opponents," the campaign described the "overwhelming response" to his message. "Senator Santorum proved that leadership trumps showmanship," the statement said.

Bachmann, Perry, and Santorum all appeared Sunday evening at an event in Iowa, the Republicans of Black Hawk County Lincoln Day Dinner.

Radio talk show host and businessman Herman Cain, who placed fifth, told CNN on Sunday, "Finishing in the middle, that is a great position to be in."

He said he runs his campaign "like a business" and makes sure he has enough money to move forward at each step.

Former House Speaker Newt Gingrich's troubled, cash-strapped campaign did not have a formal presence at the straw poll and he only got 385 votes. But his message to voters following the poll is that he has no plans to drop out.

"Congrats to Michelle B. for her straw poll win," Gingrich tweeted. "Looking forward to taking up the debate again at the Reagan Library."

That debate is scheduled for mid-September.