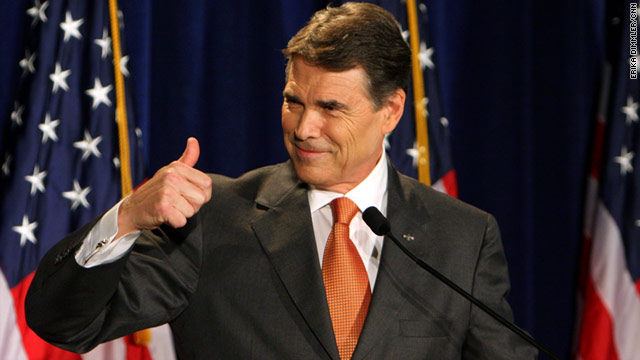 The Texas governor addressed a group of voters in Greenland, New Hampshire, a state where he is expected to launch an aggressive campaign.

"It's time to get America working, folks, and that's the reason I am announcing my candidacy today to be president of the United States," he said, as supporters cheered.

Perry spoke at the home of Deputy House Speaker Pam Tucker, one of several state officials who had previously traveled to Austin, Texas, to woo the governor.

Perry told his supporters that he intends to "compete for every vote in every state" and vowed to cover the country during the course of his campaign. He addressed Barack Obama directly during his speech, telling the president: "You can't win the future by selling it off to foreign creditors."

He called the recent Standard and Poor's downgrade of the U.S. credit rating one of a "number of recent downgrades."

Earlier in the day, Perry announced that he would run for the Republican nomination at the RedState Gathering in Charleston, South Carolina, one day after meeting with Alabama Republicans.

"I came to South Carolina because I cannot accept the path the country is on," Perry said. "A renewed nation needs a new president."

Perry recited a litany of issues facing America, including debt, high unemployment and hefty energy costs. Leadership under Obama, he said, is "rudderless."

"It's time to believe the promise of our future is better than the best days behind us," Perry said to applause.

He launched his presidential campaign website, rickperry.org, shortly before the announcement.

The timing of the announcement buttressed Perry's bid to get attention on a busy day in American politics: His South Carolina speech started the same hour as those given by candidates making a pitch for straw poll votes in Iowa.

Merle Black, a political science professor at Emory University in Atlanta, said Perry's appeal to both social and fiscal conservatives could be crucial in the South Carolina Republican primary, which every GOP presidential nominee has won since 1980.

Perry told the South Carolina crowd that he has helped cut taxes and government spending in Texas.

Meanwhile, Obama campaign spokesman Ben LaBolt struck back, saying Perry "pledged to support the 'cut, cap and balance' plan that would preserve subsidies for oil and gas companies and tax cuts for the wealthiest while ending Medicare as we know it, eroding Social Security, eliminating hundreds of thousands of jobs and erasing investments in education and research and development."

In a statement, LaBolt claimed the governor "allowed special interests to write their own rules, hired corporate lobbyists to oversee corporations, and cut funding for programs that would create opportunity for middle-class families."

Perry succeeded George W. Bush in the Texas governor's office and has held that job longer than anyone in state history.

His entry into the race will shake up the Republican field, putting Perry into direct competition with Bachmann for core right-wing support. Former Alaska Gov. Sarah Palin, if she runs, also would vie for that backing.

A CNN/ORC International poll released Thursday showed 15% of Republican and independent voters who lean toward the GOP picked Perry as their choice for the Republican nomination.

That put Perry, still a noncandidate at the time, just 2 percentage points behind former Massachusetts Gov. Mitt Romney, considered the front-runner in the nominating process. Romney's advantage over Perry is within the survey's sampling error.

Working the crowd in Iowa, Romney said Friday that he expects a "more interesting contest" with Perry in the field.