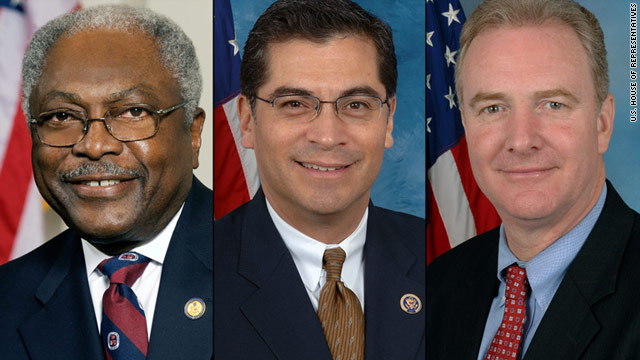 The three choices bring strong party voices from the House to the new "super committee" charged with crafting a plan to reduce the country's mounting deficits. They join three Senate Democrats -- Patty Murray, Max Baucus and John Kerry -- previously appointed to the committee, as well as six GOP fiscal conservatives from the House and Senate named by Republican leaders.

"We must achieve a 'grand bargain' that reduces the deficit by addressing our entire budget, while strengthening Medicare, Medicaid and Social Security," Pelosi said in a statement announcing her choices. "Our entire caucus will work closely with these three appointees toward this goal, which is the goal of the American people."

Clyburn, of South Carolina, is the No. 3 House Democrat, while Becerra, of California, is vice chairman of the House Democratic Caucus. Van Hollen, of Maryland, is the top Democrat on the House Budget Committee.

Both Clyburn and Van Hollen signaled their commitment to Democratic values Thursday, while Becerra warned against pre-set conditions by negotiators.

"Too often, the human side gets lost in the Washington debates about our nation's debt and deficits. I will seek to keep those interests on the table," Clyburn said in a statement that noted a widening gap in America between "those who enjoy great wealth and those who struggle to get by with little thought of ever getting ahead."

Van Hollen called for the committee to "put jobs first, sharpen America's competitive edge, ensure health and retirement security, and require shared responsibility from those who have done so well even during these tough economic times," but Becerra said that "working in a bipartisan fashion without damaging pre-conditions will guarantee the greatest chance of success."

In a letter to the committee members, fiscally consevative Democrats in the House urged all the participants to "put politics aside and work across party lines to develop a fair and feasible path to fixing our long-term debt."

All six Republicans are known for conservative stances on economic issues. Hensarling is the Republican Conference chairman and will be co-chair of the panel with Murray of Washington state, who was appointed Tuesday by Senate Majority Leader Harry Reid.

"The debt crisis is a legitimate threat to our nation's future, and the American people cannot afford to wait any longer," Hensarling said in a statement after his appointment. "Everyone can agree that we must stop spending money we don't have, and the time to act is now."

He added that the committee "will not be able to solve the crisis in a matter of months, but we can work together to tackle these challenges in order to bring back jobs, hope and opportunity for the American people."

Toomey, despite his credentials of fiscal conservatism, noted Wednesday that he recently voted to eliminate the ethanol tax subsidy and believed there were other subsidies or loopholes that could be ended as part of broad tax reform. Many conservative Republicans oppose any moves that could increase taxes.

"The goal should be to broaden the base and lower rates so that we can create an environment that's more conducive to economic growth," he said.

The committee will follow up on negotiations that started last year with the bipartisan debt commission appointed by President Barack Obama, then continued in Congress, including work by the so-called Gang of Six senators -- three Democrats and three Republicans. Both the debt commission and the other group recommended comprehensive packages that included tax reform, changes to politically sensitive entitlement programs such as Social Security and Medicare, and spending cuts.

Obama, in a speech at a hybrid car battery plant in Michigan, called Thursday for the committee to take a balanced approach to deficit reduction that ensures major corporations and wealthy individuals are contributing their fair share to a solution.

"Everybody's got to chip in," Obama said. "That's fair. You learn it in kindergarten."

Former Republican Sen. Alan Simpson of Wyoming, who co-chaired Obama's debt commission, told CNN on Wednesday that the new special committee has plenty of information to work with and shouldn't need a lot of time for further collecting or analyzing of issues.

Committee members "don't need to sit around here and gather more information," Simpson said, adding that the actual negotiating is "going to be tough."

Among the GOP choices, Camp is the House Ways and Means Committee chairman, while Upton chairs the House Energy and Commerce Committee. Upton has taken some moderate positions in the past, including attempts to decrease tax cuts in the George W. Bush administration that remain contentious today.

In a statement Wednesday, Upton said that "much more needs to be done to bring down health care costs, promote economic growth and begin to tame runaway government."

"No one believes this is going to be easy," he added.

On the Senate side, Kyl, the No. 2 Republican behind McConnell, is a staunch advocate for the military, which is targeted for deep spending cuts if the special committee fails to come up with an agreement that passes Congress by the end of the year.

Portman is a former White House budget director in the Bush administration with a reputation for working with Democrats. His fellow Ohio senator, Democrat Sherrod Brown, said Wednesday that Portman "has shown a willingness to find common ground by looking at both tax reform and spending cuts in order to reduce the deficit."

Toomey, elected to his first Senate term last year with the support of tea party conservatives, sits on the Senate Budget and Banking Committee. He told reporters Wednesday that he expected the special committee to begin its work soon, and that it would require Republicans working with Democrats to succeed.

"It has to be an exercise in finding common ground between Republicans and Democrats, but it also has to be constructive with respect to reducing our deficit and it has to be pro-growth as well," he said.

Reid went with veteran legislators including a former Democratic presidential candidate in Kerry, the Foreign Relations Committee chairman and the more moderate Baucus, who chairs the Finance Committee and has fought Republican efforts to privatize Social Security.

Reid named Murray, a war critic and champion of benefits for military veterans, the co-chair of the special committee.

In a joint statement after their appointments, the three Democratic senators said that Americans want the committee to operate without "the red-hot partisanship and brinkmanship of the last months."

"This is not going to be easy. Our challenge is to find common ground without damaging anyone's principles. We believe we can get there. This committee was designed to require bipartisanship, and we are going to work hard with our Republican colleagues to attain it," their statement said.

The committee will try to work out $1.5 trillion in deficit reduction, after an initial round of more than $900 billion in spending cuts in the debt ceiling agreement. It is required to complete its work by November 23. Congress then has until December 23 to vote on the proposal, with no amendments permitted.

According to a CNN/ORC International Poll released Wednesday, 63% of respondents say the so-called super committee should recommend increased taxes on higher-income Americans and businesses, with 36% disagreeing. By a 57-40% margin, respondents say the committee's deficit reduction proposal should include major cuts in domestic spending.

However, further cuts in defense spending get a mixed review, with 47% favoring them and 53% opposed.

Nearly two-thirds of respondents oppose major changes to Social Security and Medicare, while nearly nine in 10 don't want any increase in taxes on middle-class and lower-income Americans.

Months of rancorous negotiations on deficit reduction have failed to resolve a fundamental dispute between Republicans and Democrats involving the size of government and whether to raise revenue while cutting spending. Obama is pushing for a comprehensive plan that includes spending cuts, increased tax revenue and entitlement reforms, while Republicans seek to shrink government by proposing spending cuts and entitlement reforms without increased revenue.

The brinkmanship of the negotiations, with uncertainty over whether the government might default if no deal was reached, was one reason why Standard & Poor's downgraded the U.S. credit rating from AAA to AA-plus on Friday.

One of the main Republican arguments against tax increases for the wealthy is that they would inhibit job creation. The poll results showed that only a third of respondents agree with that stance, while 62% say taxes on the wealthy should be high so the government can use the money for programs to help lower-income Americans.

The CNN poll was conducted by ORC International from Friday through Sunday, with 1,008 adult Americans questioned by telephone. The survey was conducted both before and after Friday night's announcement of the S&P downgrade. The poll's overall sampling error is plus or minus 3 percentage points.

CNN's Dan Lothian and Paul Steinhauser contributed to this report.