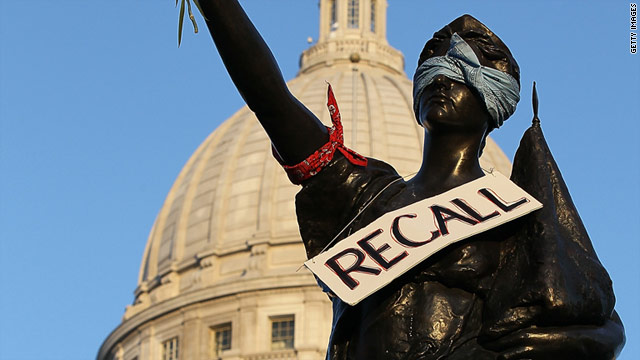 Madison, Wisconsin (CNN) -- Republicans retained four of the six state Senate seats that were in jeopardy in Tuesday's recall elections in Wisconsin, news media in the state reported.

The Wisconsin Government Accountability Board, which certifies election results, said official results will begin to come in Thursday and will be certified that day at the earliest. The unofficial results released Wednesday were collected by The Associated Press and distributed to newspapers, television and radio stations.

The recall election stems from the bitter battle last winter that saw pro-union protesters camping out in the state Capitol and Democratic senators fleeing the state in an unsuccessful attempt to halt legislation by Wisconsin Gov. Scott Walker that some felt was anti-union.

Democrats were angling to win GOP-held seats to capture control of the upper chamber. Before the election, Republicans held a 19-14 majority in the state Senate. With a victory, Democrats had hoped to build momentum for a planned effort to recall Walker.

Walker, who was elected in November with strong support from tea party activists, can't be recalled until after he serves a year in office.

Republicans have countered with their own recall attempts against three Democrats. One of them survived a challenge in July, while two others will be on the ballot next week.

"Today, Wisconsin voters rejected the reckless spending of Wisconsin Democrats and the downgrade-inducing policies of their Washington counterparts. They have given their seal of approval to Republicans' successful efforts to balance the budget and ensure a healthy economy," he said.

Priebus also said the vote was an affirmation of Walker's policies.

Walker set off a firestorm in January when he moved to curtail the collective bargaining rights of most state employees. With majorities in both houses of the Legislature, Walker and his GOP allies voted to limit raises for public employees except police and firefighters to the rate of inflation, bar unions from deducting dues from workers' paychecks and force them to hold a new certification vote every year.

Republicans insisted that the legislation was necessary to control skyrocketing public employee benefit costs and close a budget shortfall, while Democrats called it an attempt to gut public-sector labor unions, one of their core constituencies. The state Supreme Court upheld the legislation in June.

"The importance of those achievements cannot be overstated," Russo said. "Wisconsin has set an example that the nation as a whole should follow."