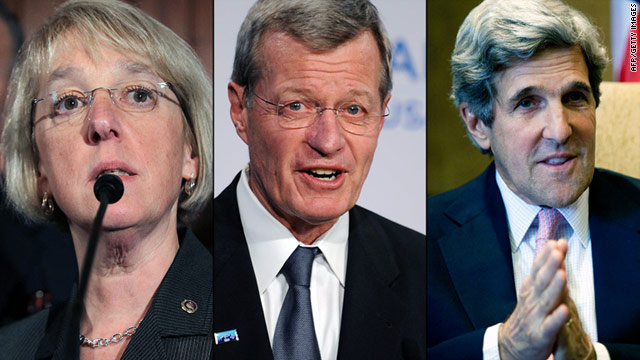 Murray, from Washington state, was tapped to co-chair the committee, Reid said in a statement.

"As the events of the past week have made clear, the world is watching the work of this committee. I am confident that Senators Murray, Baucus and Kerry will bring the thoughtfulness, bipartisanship and commitment to a balanced approach that will produce the best outcome for the American people," he said.

Under the debt ceiling deal passed by Congress and signed by President Barack Obama last week, a panel of 12 legislators -- six Democrats and six Republicans, equally divided between the House and Senate -- will be created to try to work out $1.5 trillion in deficit reduction after an initial round of more than $900 billion in spending cuts.

In a joint statement issued soon after their appointments, Sens. Murray, Baucus and Kerry said that Americans want the committee to operate without "the red hot partisanship and brinkmanship of the last months."

"This is not going to be easy. Our challenge is to find common ground without damaging anyone's principles. We believe we can get there. This Committee was designed to require bipartisanship, and we are going to work hard with our Republican colleagues to attain it," they said.

A Republican aide said Tuesday that Boehner, who will appoint the other committee co-chair, has "not yet" made his picks.

In a conference call with House Republicans earlier, Boehner said that he plans to make his decision "in the coming days," according to a participant on that call.

Another GOP aide said McConnell would make no announcement Tuesday on his appointments. Similarly, Pelosi has not yet said who she will select.

Congressional leaders have until August 16 to appoint members to the congressional committee, which is required to complete its work by November 23. Congress then has until December 23 to vote on the proposal, with no amendments permitted.

"Harry Reid's appointment of Patty Murray to Co-Chair the Select Committee on Deficit Reduction is absolute proof that Democrats are not serious about deficit reduction. As Chair of the Democratic Senatorial Campaign Committee, Murray is the Senate Democrats' fundraiser-in-chief. The Select Committee is no place for someone whose top priority is fundraising and politics," he said in a statement.