Obama calls for political will to deal with economic challenges 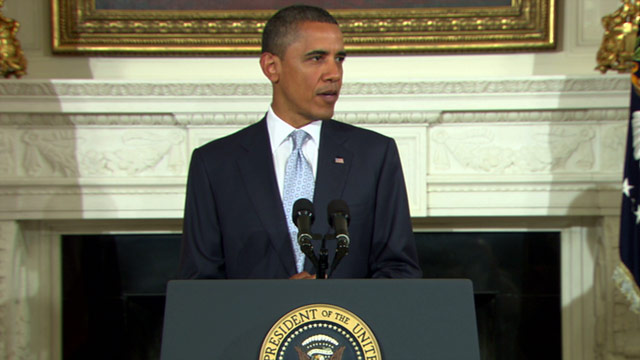 Washington (CNN) -- President Barack Obama called Monday for political will from both parties to fix what he described as the country's "eminently solvable" economic problems in the wake of last week's downgrade of its credit rating by Standard & Poor's.

In remarks to reporters that were added to his daily schedule, Obama noted the Friday downgrade from AAA to AA+ occurred because "they doubted our political system's ability to act" following the grueling negotiations with congressional leaders that preceded last week's agreement on a debt ceiling increase.

Now it will take political will on the part of Democrats and Republicans, the president said, calling on all involved to stop refusing "to put what's best for the country ahead of self-interest or party or ideology."

"We knew from the outset that a prolonged debate over the debt ceiling, a debate where the threat of default was used as a bargaining chip, could do enormous damage to our economy and the world's," Obama said on a day the Dow plunged 634 points in reaction to the S&P downgrade.

"That threat, coming after a string of economic disruptions in Europe, Japan and the Middle East, has now roiled the markets and dampened consumer confidence and slowed the pace of recovery." he said.

Calling the situation a "legitimate source of concern," Obama said the "good news" is that "our problems are eminently solvable. And we know what we have to do to solve them.

Later at a Democratic fund-raiser, Obama said he inherited the nation's economic problems.

"Look, we do have a serious problem in terms of debt and deficit, and much of it I inherited when I showed up," he said. "And because of the financial crisis, it got worse. So there's no doubt that we've got to fix our long-term finances."

The nation needs to tackle its budget deficits over the long term, he told reporters earlier, adding that he will be presenting his ideas for how to proceed in coming weeks as a special congressional committee set up under the debt-ceiling agreement begins its work.

In his remarks, Obama said the issue of the most immediate concern to most Americans and to financial markets was the slow pace of recovery from economic recession.

He renewed his call for Congress to extend into next year the payroll tax cut that took effect in January as well as funding for unemployment insurance benefits, saying both steps would spur economic activity by putting money into the hands of consumers.

Noting public concerns about the economy, Obama declared: "Markets will rise and fall, but this is the United States of America. No matter what some agency may say, we've always been and always will be a triple-A country."

To tackle the mounting federal deficits and national debt, Obama has called for a comprehensive agreement that would cut spending, reform entitlement programs and increase tax revenue.

"What it requires is that those of us who have the capacity can pay our fair share when it comes to taxes, like we did just as recently as 2000, when Bill Clinton was president, and requires us to make some modest adjustments in programs like Medicare that allow us to get a better bang for our buck on health care," Obama said at the evening fund-raiser.

"And if we did those things over the course of 20, 30 years, because this is a 20- or 30-year problem, then the problem would be solved," he said. "It's not rocket science. And it doesn't require us to decimate the things that we know are going to help us grow and become competitive."

Republicans oppose any kind of tax increase, and many reject increased tax revenue even if the tax rates remain the same or are lowered.

The tax revenue issue, as well as the scope of entitlement reforms, have been the main stumbling blocks to a major deficit reduction deal.

"Over the next several months, there will be tremendous pressure on Congress to prove that S&P's analysis of the inability of the political parties to bridge our differences is wrong," said House Majority Leader Eric Cantor said in a memo to GOP members.

"In short, there will be pressure to compromise on tax increases," he said. "We will be told that there is no other way forward. I respectfully disagree."

The special congressional committee set up under a debt ceiling deal will comprise 12 members -- six Democrats and six Republicans -- from the House and Senate. It must present its recommended package of deficit reduction steps by November 23, and Congress must vote on the package with no amendments by December 23.

Congressional leaders have until August 16 to appoint members to the special committee.