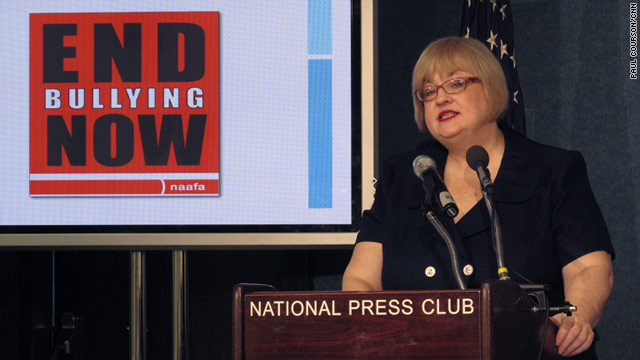 The National Association to Advance Fat Acceptance is asking lawmakers behind the Safe Schools Improvement Act not to stop at listing race, religion, sexual orientation, nationality and other characteristics that could make a child a target of bullying.

The group also wants to discourage the targeting of children who are heavier or shorter than their peers.

"One in six children are being bullied," association board member Jason Docherty said. "Eighty-five percent of those bullying cases are children of size or with visible handicaps. So a federal law that does not protect those children is a federal law without teeth."

According to a statement announcing the legislation earlier this year from the bill's co-sponsor, Sen. Bob Casey, D-Pennsylvania, the Safe Schools Improvement Act would require schools and districts receiving designated federal funds to adopt codes of conduct specifically prohibiting bullying and harassment.

The measure would require states to compile data on bullying and harassment in their schools and report the results to the U.S. Department of Education.

National Association to Advance Fat Acceptance spokeswoman Peggy Howell said Monday that her group, founded in 1969, has traditionally fought bias against adults who are overweight. And she said that although those problems continue, "now we are talking about people of all ages."

"When our first lady said we have to wipe out obesity in one generation, she essentially gave permission to everyone to condemn the children with higher body weight," Howell said.

"The perpetrators feel justified in their actions," she said, "because after all, the first lady said these kids have got to go."

Howell said she did not think the first lady meant any harm but added, "this is one of the consequences of focusing on reducing body size, as opposed to improving health."

The group's officials and supporters said they plan to ask lawmakers and their staff members on Capitol Hill to add physical characteristics to the anti-bullying legislation as it moves ahead in Congress.

A call to Casey's office to respond to the group's concerns was not immediately returned.