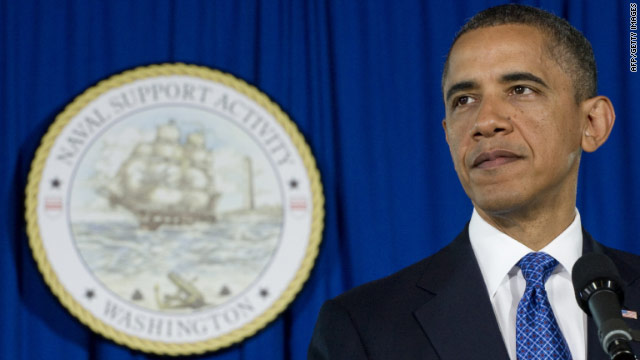 President Obama talks about the economy and employing veterans at the Washington Navy Yard in Washington, D.C., on Friday.
STORY HIGHLIGHTS
RELATED TOPICS

In front of 300 active service members and their families at the Washington Navy Yard, the president laid out a series of reforms that his administration is pledging will better prepare service members for the civilian work force and encourage employers to hire recent veterans.

"Our companies need skilled workers like our veterans to help them grow and there is no reason why we can't connect the two," said Obama, who was introduced by Adm. Mike Mullen, chairman of the Joint Chiefs of Staff.

The speech comes at an opportune time for the White House, coinciding with the release of the labor department's July employment report showing the private sector added more than 150,000 jobs while the unemployment rate ticked down to 9.1%.

But the unemployment rate among post-9/11 veterans stands at more than 4 percentage points higher than the nationwide figure and the White House notes many of the jobless veterans are former manufacturing, construction and mining workers -- industries that were especially devastated by the recession.

Among the president's proposals is a Returning Heroes and Wounded Warrior Tax Credit, which would provide businesses that hire veterans a tax break, varying in size depending on how long the newly hired veteran has been unemployed and whether he or she has a disability.

Obama also unveiled a new Department of Defense task force that, with help from the administration's economic and policy teams, is charged with implementing new programs that ensure service members have the skills and training needed to transition to private sector jobs.

The administration is dubbing this transition period a "reverse boot camp," during which more access to career guidance and counseling will be made available.

Meanwhile, the Labor Department will unroll an "enhanced career-development and job-search service package" while the Office of Personnel Management will publish a manual for business managers outlining how they can locate veterans with skills and training that match open positions.

The president also directly challenged private sector businesses to hire or train 100,000 unemployed veterans or their spouses during the next two years.

"Today we are saying to our veterans, 'You fought for us and now we are fighting for you -- for the jobs and opportunities you need to keep your families strong and to keep America competitive in the 21st century," Obama said.