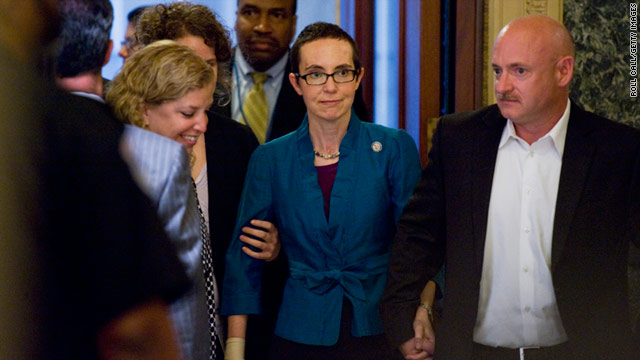 Washington (CNN) -- U.S. Rep. Gabrielle Giffords returned to the floor of the House of Representatives Monday evening for the first time since she was grievously wounded during a January assassination attempt.

Giffords, D-Arizona, was met by thunderous applause from colleagues as she walked into the chamber to support a hard-fought bill that would raise the U.S. debt ceiling. Vice President Joe Biden was also on hand as she entered the House, escorted by her chief of staff and by Florida Democrat Debbie Wasserman Schultz, a close friend.

Members gave her a standing ovation and swarmed to her side as she came in. House Minority Leader Nancy Pelosi, who could be seen wiping her eyes during the scene, called Giffords "the personification of courage."

"Her presence today, to make sure that we honor the obligations of our great country, is important and symbolic," the California Democrat said after the vote. "Her presence here in the chamber as well as her service throughout her entire service in Congress, brings honor to this chamber.

A Democratic source told CNN that Giffords' office notified Pelosi's staff of her planned return around noon Monday, and that Giffords' decision was not known earlier.

House Speaker John Boehner said he was "very surprised" to see Giffords, whom he met as she got off a Capitol elevator.

"It was nice to see her," said Boehner, who said he told Giffords, "Welcome back."

Giffords, a three-term congresswoman, was shot through the head at a meeting with constituents in Tucson on January 8. Six other people, including one of her aides and a federal judge, were killed in the attack, and 12 others were wounded.

The man accused of unleashing the bloodbath, 22-year-old Jared Lee Loughner, has been diagnosed as schizophrenic and been ruled incompetent to stand trial. Loughner has refused to take anti-psychotic drugs and is being held in a federal mental hospital.

Giffords voted against two previous increases in the debt ceiling. But in a statement issued by her office, she said Monday night's vote was "substantially different, with the strength of the U.S. economy hanging in the balance."

"I had to be here for this vote. I could not take the chance that my absence could crash our economy," Giffords said.

The measure passed 269-161, a day before a Tuesday deadline for a possible default on payments to U.S. government bondholders.

CNN's Deirdre Walsh and Kate Bolduan contributed to this report.