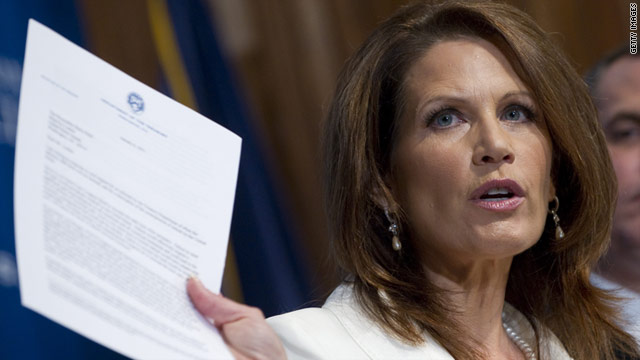 Michele Bachmann was to appear in Iowa on Monday, but she's flying back to Washington to be ready to vote against the bill.
STORY HIGHLIGHTS

Washington (CNN) -- Rep. Michele Bachmann is cutting short her presidential campaign trip to Iowa to return to Washington for a vote on a debt ceiling deal.

Bachmann was to make two appearances Monday -- a midday event in Newton and a late afternoon backyard chat in Dexter -- but her campaign said she was instead flying back to be ready to vote against the bill later in the day.

The Minnesota Republican has opposed any increase in the debt ceiling during negotiations.

"The 'deal' ... spends too much and doesn't cut enough," Bachmann said in a statement released Sunday after President Barack Obama announced the agreement with congressional leaders.

Who will vote for debt deal?
RELATED TOPICS

"Is this the deal I would have preferred? No," Obama told reporters. "I believe that we could have made the tough choices required -- on entitlement reform and tax reform -- right now, rather than through a special congressional committee process. But this compromise does make a serious down payment on the deficit reduction we need, and gives each party a strong incentive to get a balanced plan done before the end of the year."

"This isn't the deal the American people 'preferred' either, Mr. President," Bachmann said in her response. "Someone has to say 'no.' I will."

"Mr. President, I'm not sure what voice you're listening to, but I can assure you that the voice of the American people wasn't the voice that compelled Washington to act," she said in a statement after the president announced a deal with congressional leaders Sunday night. "It was you that got us into this mess, and it was you who wanted a $2.4 trillion blank check to get you through the election."

What's your message to Congress and the White House?

Bachmann may still get to call into the Iowa events, campaign spokeswoman Alice Stewart said.

It was the second time in three days the debt situation has forced her to change her campaign schedule. Bachmann also had to cancel Saturday stops in Iowa to remain in Washington for votes. Bachmann spoke on the House floor during the debate.