Are baby boomers to blame for debt crisis? 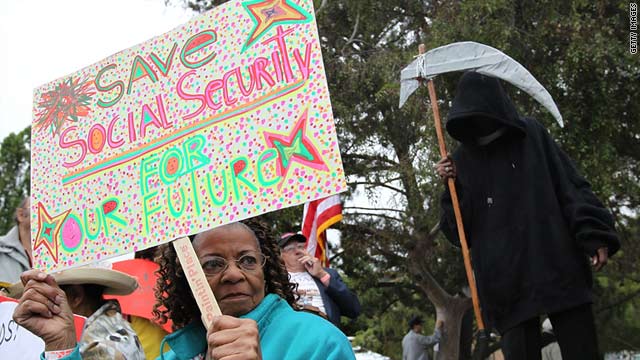 They lived well, grew up in relative abundance and, some say, expected their Social Security, health care and government support to be there as they grew old.

Now, as the future of the country's economy is up in the air, is this group of 80 million aging Americans -- many of whom are sprinting toward retirement age -- the ones to blame for the nation's shaky economic system?

The answer is not so simple.

Baby boomers grew up during relative prosperity, from the economic boom of the post-World War II '50s to the "Me" generation of the '60s through the lucrative uptick in the Reagan '80s. And then there were the budget surpluses they enjoyed during the Clinton '90s.

As a result, many were able to buy second homes, take out loans at low interest rates, buy cheap gas and pump money back into the economy.

In the last days of the Bush administration, the economy went belly-up, forcing Washington to bail out Wall Street in order to prevent another Great Depression.

"Keep in mind that our parents who lived through the depression understand what adversity looks like. I'm not sure baby boomers know what that looks like," said David Cork, a demographer and baby boomer himself. "So maybe we got a bit of a taste for it two years ago."

Cork, a Canadian businessman and author of the book "The Pig and the Python," said the American economy has been thriving especially in boomers' formative years, "so they're not used to adversity."

"It's not because the boomers are a nasty generation. It's just that there's a lot of us, and we have a tendency of wanting to get it our own way," he added. "I think we've been very successful at that. We've created great wealth, but we are looking at it at a time when you have to pay the piper."

An analysis of data from the past three censuses shows that because of baby boomers' "aging in place," the population of those age 45 and over grew 18 times as fast as the population under age 45 between 2000 and 2010, said William Frey, a demographer and senior fellow in the Metropolitan Policy Program at the Brookings Institute.

Frey's report also found that the baby boomers (or "pre-seniors," as he called them) are "growing rapidly in all areas of the country," including college towns like Austin, Texas, Raleigh, North Carolina, and Madison, Wisconsin.

Regions experiencing the fastest senior -- age 65 and older -- growth are in the Sun Belt, which stretches from Western states such as California and Arizona east to Florida, according to the report.

Frey, also a boomer, said that although his generation is not necessarily taking the entitlement programs that their parents are, they can see what's coming down the road.

"They're not trying to skim off money from everybody else," he said. "It's just that these are issues that are now front and center for them where they weren't before."

Thomas Firey, a senior editor at the conservative Cato Institute and member of generation X, said it's unclear as to what's going to happen to Social Security.

"Under current law, what's supposed to happen is once the trust fund runs dry, the benefits are to be cut by roughly 25% to bring it back into balance. Each year's income will equalize the outflow," said Frey, who wrote a 2001 column titled "Boomers Fleece Generation X with Social Security. "But no one expects that to happen. (So) are we going to raise taxes on current workers? Are we going to get rid of the tax?"

But criticizing baby boomers is not necessarily a politically wise thing to do, especially when it comes to their voting behavior. Older voters consistently turn out in elections and are a key demographic for politicians on both sides of the aisle.

Jerry Shereshewsky, the self-described "chief grown-up" at the firm GrownUpMarketing, is a baby boomer. The 65-year-old said it's not his generation group to blame, it's Congress'.

"It was not a secret that this largest cohort in American history was going to get older every year," he said. "The fact that Congress has not done a very good job of keeping up with what is really happening in the world: life expectancy, better medical care. You give people a lot of cake and ice cream, they're going to eat it."

Frey added that any good demographer would have told you 20 years ago that "we would be hitting the wall around now. But it hasn't seemed to sink in for folks on Capitol Hill or anywhere else."

Shereshewsky also issued a stern warning to those in Congress who may blame boomers for today's economic problems.

"If you want to look through the telescope and say who should be getting beaten up here a little bit, I would say every member of the legislative branch for the last 30 years should be taken outside and spanked, because they did really stupid things," he said. "Why did they increase these benefits? They get votes. Why don't they raise taxes? They're afraid someone's not going to vote for them."

David Certner, legislative policy director for the AARP, said the country got into its debt mess not because of older Americans but because of Washington's out-of-control spending.

"The problem we're in today was caused by things we've done in the last two years, in particular engaging in two wars that haven't been paid for in any way, shape or form -- as well as the fact that we've had a significant drop in revenues partly as a result of our changes in the tax laws," he said.

Certner added that it's the rising health care costs that should worry all Americans.

"Health care costs are burdening people right now who are trying to pay for it. ... We need to get the whole health care cost problem under control, because it really does put a crimp on the rest of the economy," he said. "People who are working now are probably seeing their wages go up slower because more of their money is going to health care costs."

And that's something 23-year-old Jordan Balkin is finding out, at least when it comes to how much comes out of her paycheck for entitlement programs.

"It's a little less than 1%. But when you add it up, it's about $100, which would be nice to use towards other things, especially not knowing if I will get a chance to see that money in the future," said Balkin, who works in social media in Washington.

As for whether she's worried about her own retirement, Balkin -- part of what's described as generation Y -- said she can only hope that some of the money will be returned. For now, it's all about the present.

"I just keep thinking about saving for the near future when I want to have a family, buy a house," she said. "I mean, there is that offhand dream that I'll win the lottery -- hey, someone's got to be a winner."