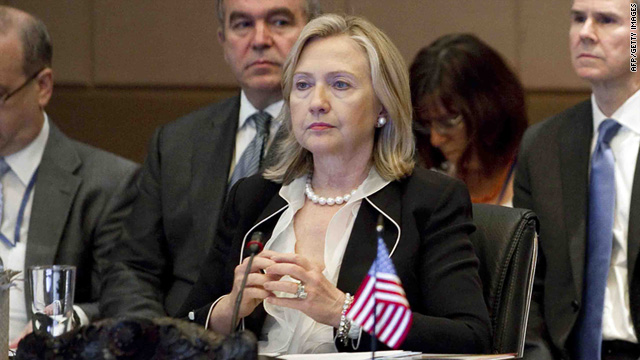 Secretary of State Hillary Clinton called the pending bill "debilitating to my efforts to carry out a considered foreign policy."
STORY HIGHLIGHTS

Washington (CNN) -- Calling it "debilitating to my efforts to carry out a considered foreign policy and diplomacy," Secretary of State Hillary Rodham Clinton is warning members of the House of Representatives that she "will recommend personally" that President Barack Obama veto a bill pending in the House that would severely restrict State Department operations, international organizations and foreign assistance.

In a letter to Rep. Ileana Ros-Lehtinen, R-Florida, chairman of the House Committee on Foreign Affairs, Clinton listed a number of what she termed "onerous" restrictions that would cut contributions from the United States to international organizations, ban funds for the Obama administration's Global Climate Change Initiative and prohibit any economic or democracy aid to countries whose votes at the United Nations oppose the U.S. more than 50% of the time. CNN obtained a copy of the letter from a source with knowledge of the House negotiations.

Secretary Clinton, in her letter, maintains the bill contains "crippling restrictions on security assistance where maximum flexibility is needed, especially with regard to the governments of Egypt, Lebanon and Yemen, and to the Palestinian Authority."

When asked about the bill by CNN, State Department Deputy spokesman Mark Toner said the bill was passed on a "party-line vote." The State Department believes the funding levels and restrictions in that bill do not reflect the national security roles the department and USAID currently play in countries such as Afghanistan and Iraq and would have "serious implications on our operations," Toner said.

"We've got a full plate and we're committed to carrying out those missions which we believe are in our national interests. We cannot do so at the proposed funding levels," he said.

Responding to Clinton's letter, Ros-Lehtinen's office said she was "disappointed that the Obama administration would stand in the way of a bill that saves billions of dollars, mandates needed bureaucratic and policy reforms, enhances U.S. security by placing conditions on U.S. assistance to Pakistan, Yemen, Egypt, Lebanon, and the Palestinian Authority, and blocks U.S. tax dollars from being wasted on foreign organizations, programs, and governments that work to undermine U.S. interests abroad."

The House bill, which would have to pass the Senate to end up on the president's desk, also would ban U.S. aid to countries unless the secretary of state can certify that their governments contain no members of terrorist organizations. This includes at least two countries currently undergoing major change as part of the so-called "Arab spring" -- Egypt and Yemen.

The House Appropriations State and Foreign Operations subcommittee is working on a separate appropriations bill that would cut the State Department's regular discretionary funding by 18% below last year's level.

The head of that subcommittee, Rep. Kay Granger, R-Texas, says on her website: "In this period of change throughout the Middle East, we have been forced to look closely at who exactly we are working with in the region. The Palestinian Authority, Lebanon and Egypt have gone through enormous change. There is still uncertainty about whether they will continue to work toward peace or allow extremism into their governments."

The bill also would reinstate the Mexico City Policy, which banned federal funding for organizations that promote abortion or perform abortions. That policy, adopted in 1984 under President Ronald Reagan, twice was overturned by Democratic presidents, including Obama.

Rep. Nita Lowey of New York, the ranking Democrat on the subcommittee, calls the bill's ban on funding for the United Nations Population Fund and attempt to reinstate the so-called "global gag rule," as Lowey and other opponents of the Mexico City Policy call it, an example of "outrageous, divisive policies."

"Whether you call yourself a Republican or a Democrat, pro-choice or pro-life," she says, the cuts are "counterproductive to our shared goals of reducing unwanted pregnancies, maternal and infant deaths, and abortions." Lowey charges that the two provisions would lead to "7,700 maternal deaths, 35,000 orphans, and 1.3 million more abortions next year."

Samuel A. Worthington, the head of InterAction, the largest alliance of U.S.-based international NGOs, said, "These cuts will not only harm U.S. national interests, they will have a huge impact on the lives of those who are already marginalized in the poorest corners of the earth."

"The argument that a nation with an annual GDP of $14.6 trillion cannot afford to invest a fraction of 1% of that to proactively work to build a safer, more prosperous world, and to fully fund desperately needed humanitarian activity, is simply false."

Rep. Granger maintains that "in this difficult geopolitical and economic climate, the American people deserve a policy that is based on American principles, looks out for American interests, and wisely invests American dollars."