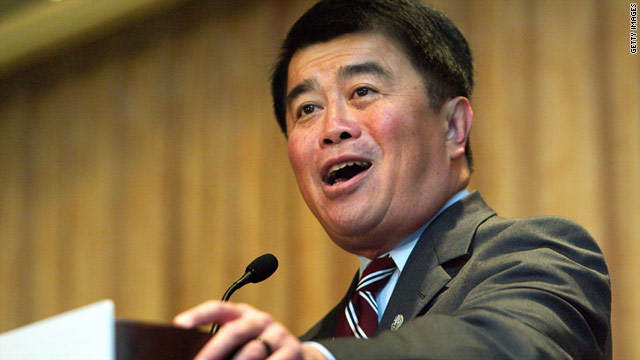 (CNN) -- Rep. David Wu of Oregon will not seek re-election and "is considering all options" regarding whether to serve out the rest of his term, Wu's communications director told CNN Monday.

"He (Wu) will consider those options and make a decision in due course," said Erik Dorey, declining to elaborate on a possible time frame.

Wu, facing mounting calls for his resignation, gave no indication Monday that he planned to step down.

A spokeswoman in his Portland office refused to comment on alleged sexual advances toward an 18-year-old or discuss the congressman's future.

On Friday, the Oregonian newspaper reported that the daughter of a fund-raiser of Wu's accused him in May of unwanted sexual advances that allegedly occurred in November.

Citing anonymous sources from inside the congressman's office, the Oregonian said the woman, who the paper declined to name, left a voice-mail message at Wu's Portland office alleging aggressive advances by Wu.

According to the newspaper, the woman was 18 when the alleged incident, which was never reported to police, took place.

House Democratic leader Nancy Pelosi is asking for an ethics investigation of Wu, a seven-term congressman and a Democrat.

Meanwhile Wu said in a written statement given to CNN, "This is very serious, and I have absolutely no desire to bring unwanted publicity, attention or stress to a young woman and her family."

In Wu's home state, Republicans and some of Wu's fellow Democrats responded to the allegations by calling for him to resign.

"Our stance and the stance of all Oregonians is that David Wu should step down," Allen Alley, the chairman of the Republican Party of Oregon, told CNN. "We need a representative on their 'A-game' and David obviously is not."

Oregon Labor Commissioner Brad Avakian, a Democrat, said in a statement, "David Wu should do the right thing and step aside now." Avakian had previously announced plans to run against Wu when he is up for re-election next year.

David Robinson, who lost against Wu in the Democratic primary last year, said he was pushing for the Democratic Party of Washington County to approve a vote of no confidence for Wu in a meeting on Wednesday.

"I have been e-mailing and calling all day and believe we have the votes to pass it," Robinson said. He acknowledged it was not clear that Wu would step down even if the county Democratic Party called for him to do so.

Wu has faced and weathered allegations of impropriety before. In February, the Oregonian reported that shortly before his re-election in November 2010, Wu was confronted by campaign staff over his erratic behavior and use of medication. At the time the staffers tried and failed to have Wu seek hospitalization, the newspaper reported.

"To address my behavior and its consequences, I sought professional medical care and continue to obtain professional help from my doctor," Wu later said in a statement. "I fully acknowledge that I could have dealt with these difficult circumstances better, and I remain focused on being a good father to my children and a strong representative for the people of Oregon."