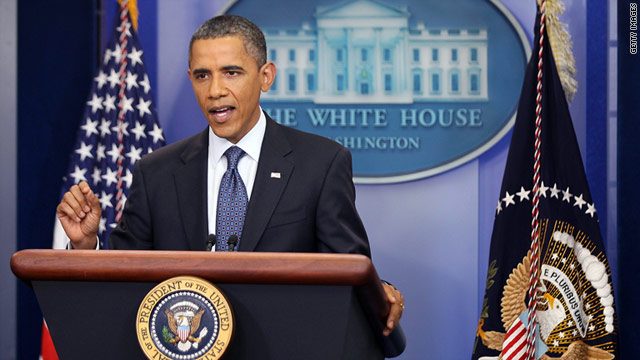 The plan proposed by Reid, D-Nevada, "is a reasonable approach that should receive the support of both parties, and we hope the House Republicans will agree to this plan so that America can avoid defaulting on our obligations for the first time in our history," said a statement by White House Press Secretary Jay Carney. "The ball is in their court."

Reid told reporters that his plan meets two demands by conservative House Republicans: a dollar-for-dollar match between the amount of spending cuts and the increase in the debt ceiling, as well as no tax increases.

"All the cuts put forward in this approach were previously agreed to by both parties through the process led by the Vice President," the White House statement said.

"Senator Reid's plan also reduces the deficit more than enough to meet the contrived dollar-for-dollar criteria called for by House Republicans, and, most importantly, it removes the cloud of a possible default from our economy through 2012."

Obama: 'I need a dance partner'

Will the U.S. default if deal not met?

However, House Speaker John Boehner, R-Ohio, who unveiled his own debt ceiling proposal Monday, told reporters that the Reid plan failed to address the major causes of America's mounting federal deficits and debt, including entitlement programs such as Medicare, the government-run health insurance for senior citizens.

"I believe that the plan is full of gimmicks," Boehner said, adding it would not change the government's spending patterns, "and it doesn't deal with the biggest drivers of our deficits and debt, and that is entitlement programs."

In addition, the Reid plan calls for establishing a special congressional committee including members of both chambers and both parties to recommend further deficit reduction steps, including possible reforms to the tax code and entitlement programs such as Medicare and Social Security.

The 12-member committee would complete its work in time for the Senate to vote on it, with no amendments allowed, by the end of this year.

Both Reid and Sen. Charles Schumer, D-New York, said an alternative plan proposed Monday by House Republicans has no chance of being approved by the Senate. Obama also has threatened to veto the Republican plan.

In contrast, they noted, the components of Reid's plan already have been supported by House Republicans. For example, Schumer said the $1 trillion in savings from winding down the wars in Iraq and Afghanistan has been confirmed by the nonpartisan Congressional Budget Office and was included in a budget plan the House passed with unanimous Republican support earlier this year.

"If they refuse this proposal, it means they want a default, for whatever reason," Schumer said.

CNN's Kate Bolduan and Tom Cohen contributed to this report.