Boehner: My last offer's still on the table 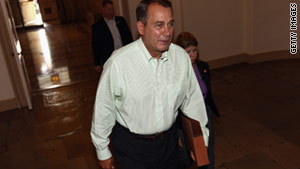 Washington (CNN) -- House Speaker John Boehner said Sunday that his last offer to the White House remains on the table, despite his weekend decision to break off talks over a deal to raise the federal debt ceiling.

While saying he would prefer to reach an agreement with Democrats, Boehner added "if that's not possible, I and my Republican colleagues in the House are prepared to move on our own, today."

He offered no details, saying they were still being crafted. Any GOP-only plan would likely have trouble winning approval in the Democratic-controlled Senate.

On debt, GOP wants solution, not a deal
RELATED TOPICS

Treasury Secretary Tim Geithner said Sunday that Boehner and other congressional leaders are still talking about a comprehensive deficit reduction deal that that would increase the debt ceiling to prevent a government default.

Read the latest on the debt talks

A Republican aide told CNN on Saturday that Boehner wanted a solution before Asian markets opened Monday morning -- Sunday evening in Washington -- but the speaker downplayed that concern during his Sunday interview on Fox.

"While Asia may be important, this is about American jobs and the American economy," Boehner said. "If we don't do something serious about controlling our debt, it's hanging over our country like a wet blanket."