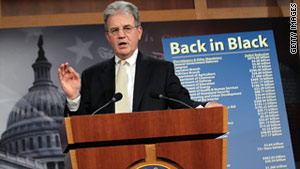 Sen. Tom Coburn, R-Oklahoma, rejoined the "Gang of Six" after withdrawing from the group.
STORY HIGHLIGHTS

Washington (CNN) -- President Barack Obama held separate meetings Wednesday with top congressional Democrats and Republicans as part of ongoing talks on a measure that would raise the nation's debt ceiling by August 2 to avoid a government default.

With time running out to reach an agreement, the possibility of a comprehensive deficit-reduction deal sought by Obama appeared less likely, with the president and Congress instead being forced to focus on a narrower goal of increasing the government borrowing limit in the next 13 days so it can pay its bills after August 2.

At his daily briefing, White House Press Secretary Jay Carney signaled to reporters that Obama would be willing to accept a short-term increase in the debt ceiling -- which caps the amount of money the government can borrow -- if it is tied to agreement by both parties on a broader deficit reduction deal sought by the president.

Obama previously rejected such a short-term increase in the debt ceiling, and Carney's remarks sought to bolster support for a compromise in the talks as the deadline for default nears.

"We believe a short-term extension absent an agreement to a larger deal is unacceptable," Carney said.

So far, the main sticking point in negotiations has been Republican refusal to accept increased tax revenue sought by Obama and Democrats as part of a deal. Spurred by conservatives elected with tea party backing, Republicans seek to shrink the size of government through spending cuts while either keeping tax revenues where they are now or reducing them through a reformed system.

'Gang of Six'
A bipartisan group of U.S. senators who have unveiled a $3.7 trillion debt reduction plan. Its members are:

Obama argues for a balanced approach that includes spending cuts and increased tax revenues to enable the government to continue what he calls critical spending for future economic growth in education, infrastructure development and clean energy.

In addition, Republicans are linking proposals to shrink the mounting federal deficit to getting their support for raising the federal debt ceiling, while Obama and Democrats say the two issues should be separate to prevent politics from affecting the U.S. credit rating in the event of a government default.

Anti-tax crusader Grover Norquist, whose Americans for Tax Reform is spearheading Republican opposition to any tax increase, told CNN on Wednesday that a likely deal will mean "the president will get less money than he wanted, the Republicans will get less spending cuts than they wanted, but it won't raise anybody's taxes."

Top Democrats from both chambers met with Obama for about 50 minutes on Wednesday afternoon. Later, the top two House Republicans -- Speaker John Boehner and Majority Leader Eric Cantor -- met with the president for about 80 minutes.

Boehner then gathered with members of his staff and six first-term House Republicans -- elected in last year's tea party-backed conservative wave -- for talks over pizza in a Capitol building conference room.

Earlier, Democratic and Republican sources confirmed that the top four House leaders -- Boehner, Cantor, Minority Leader Nancy Pelosi and No. 2 Democrat Steny Hoyer -- had their own meeting to discuss proposals to raise the debt ceiling.

The White House meetings came a day after Senate negotiators from both parties, the so-called "Gang of Six," unveiled the possible compromise plan, and the House voted 234-190 almost completely on party lines to pass a tea party-inspired "cut, cap and balance" bill dismissed by Obama and Democrats.

Key administration and congressional officials are currently focused on the new bipartisan $3.7 trillion debt reduction plan by the "Gang of Six" -- the latest effort to avoid a potentially catastrophic default next month on the federal government's financial obligations.

Obama has offered strong praise for the initiative, calling it "broadly consistent" with his own approach to debt reduction because it mixes tax changes, entitlement reforms and spending reductions. However, Carney made clear Wednesday that Obama was not adopting the plan outright, and that further negotiations on specific provisions would be necessary.

Senate Democratic leaders have expressed skepticism that they will be able to increase the debt limit and pass the "Gang of Six" plan by the looming August 2 deadline.

If Congress fails to raise the current $14.3 trillion debt ceiling by that date, Americans could face rising interest rates, a declining dollar and increasingly jittery financial markets, among other problems.

The seriousness of the overall situation was reinforced last week when a major credit-rating agency, Standard and Poor's, said it was placing the United States' sovereign rating on "CreditWatch with negative implications." Another major agency -- Moody's Investors Services -- said it would put America's bond rating on review for a possible downgrade.

In an interview Wednesday with KMBC-TV of Kansas City, Missouri, Obama called the situation "a self-created crisis in some ways" because of political intransigence.

"It has to do with folks who are digging into set positions rather than saying how do we solve a problem," Obama said.

The House Republicans' "cut, cap and balance" bill would raise the debt ceiling while imposing strict caps on all future federal spending and making it significantly tougher to raise taxes -- the solution favored by hard-line conservatives.

The bill -- which also requires Congress to pass a balanced budget amendment to the Constitution before raising the debt ceiling -- has little chance of clearing the Democratic-controlled Senate or surviving a certain presidential veto.

The Tuesday vote did, however, allow rank-and-file Republicans to clearly demonstrate their preference for steps favored by many in the tea party movement even as their leadership seeks a middle ground with Democrats.

"While President Obama simply talks tough about cutting spending, House Republicans are taking action," Boehner, R-Ohio, said in a statement after the vote.

Obama said before the vote that legislators "don't have any more time to engage in symbolic gestures."

Obama also refused to rule out a fallback plan proposed by Senate Minority Leader Mitch McConnell, R-Kentucky, that would raise the debt ceiling up to $2.5 trillion through the 2012 election. Carney said the McConnell plan, now being worked out with Senate Majority Leader Harry Reid, D-Nevada, is not the preferred option but must be ready to go in case a bigger deal proves unattainable.

Under the "Gang of Six" plan -- put together by three Democrats and three Republicans -- $500 billion in budget savings would be immediately imposed, with marginal income tax rates reduced and the controversial alternative minimum tax ultimately abolished.

Sen. Tom Coburn, R-Oklahoma, announced Tuesday that he had decided to rejoin the group. Coburn had recently withdrawn due to a dispute over entitlement cuts, but declared Tuesday that the plan, which now includes $116 billion in entitlement health care cost savings, has "moved significantly, and (is) where we need to be."

The other members are Republican Sens. Saxby Chambliss of Georgia and Mike Crapo of Idaho, and Democratic Sens. Dick Durbin of Illinois, Kent Conrad of North Dakota and Mark Warner of Virginia.

"We don't have 60 votes, but we're moving toward it," Durbin, the Senate majority whip, told reporters Wednesday, referencing the number of votes necessary to overcome a potential filibuster and win Senate approval.

A spokesman for Boehner said Tuesday the "Gang of Six" plan is similar in concept to what Boehner and Obama had discussed in their negotiations so far, "but also appears to fall short in some important areas."

Asked about such resistance to the plan's tax provisions, Chambliss said Wednesday that those raising questions "need to read the plan."

Meanwhile, Durbin pointed out that the plan still must be drafted into legislative language and analyzed by the Congressional Budget Office before it can be considered.

Reid said he's open to incorporating some elements of the proposal into the fallback bill he is working out with McConnell.

Several new public opinion polls, meanwhile, show that a majority of Americans want legislators to forge a comprehensive deal that includes spending cuts and tax hikes instead of refusing to yield from their starting positions.

But resistance to higher taxes is now a bedrock principle for most Republicans, enforced by conservative crusaders such as Norquist. His group has sponsored a high-profile pledge to oppose any tax increase. The pledge has been signed by more than 230 House members and 40 senators, almost all of them Republicans.