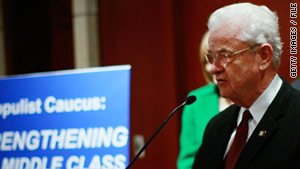 Rep. Leonard Boswell (D-Iowa) tussled with an intruder in his home this weekend, but was unharmed.
STORY HIGHLIGHTS
RELATED TOPICS

(CNN) -- Rep. Leonard Boswell, D-Iowa, and his family were victims of a home invasion at their rural farmhouse outside Lamoni, Iowa, over the weekend.

An intruder entered the home Saturday night through the front door, physically assaulted Boswell's daughter, and demanded money at gunpoint, a statement from the congressman's office said.

Hearing his daughter's screams, the 77-year-old Boswell -- who served two terms in Vietnam -- tussled with the intruder to try to yank the weapon from him, the office said.

The incident ended when Boswell's 22-year-old grandson grabbed a gun from another room and pointed it at the intruder -- sending him running into the woods, said Jane Slusark, the congressman's spokeswoman.

"When you see one of the people that you love very much, you see they're in that kind of danger, why you have to do something. You gotta do something," Boswell told reporters Monday.

Other than a few scrapes and bruises, the eight-term congressman and his family were unharmed, Slusark said.

Local, state and federal authorities are investigating the incident.

The FBI is assisting in the investigation, FBI spokeswoman Sandra Breault said.

CNN's Carol Cratty and Paul Courson contributed to this report.