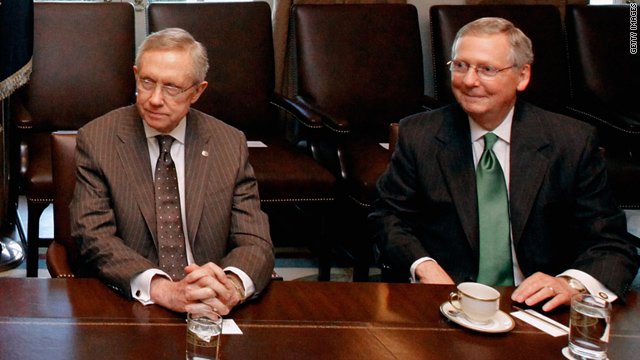 Washington (CNN) -- Because there is a growing consensus on Capitol Hill that the White House talks are unlikely to bear fruit, lawmakers in both parties are looking to a plan offered by Senate Minority Leader Mitch McConnell as the most likely legislative solution to avoiding a default.

McConnell, R-Kentucky, and Senate Majority Leader Harry Reid, D-Nevada, are now considering adding to the measure in order to boost its chances of passing the GOP-controlled House and Democratic-led Senate.

As described by McConnell at a news conference last week, his legislation would authorize the president to request of Congress debt ceiling increases in three increments between now and the end of next year. The first would boost the debt limit by $700 billion and the next two by $900 billion each.

Along with each request, the president would be required to submit a list of recommended spending cuts -- in an amount higher than the ceiling increase request -- but those cuts would not need to be enacted for the debt limit to go up.

Congress would then vote on -- and probably pass -- "resolutions of disapproval" of those requests. The president probably then would veto those resolutions. Unless Congress overrode those vetoes, which is unlikely, the debt ceiling would increase.

The purpose of this convoluted plan is to allow most Republicans and some Democrats to vote against the politically unpopular debt ceiling increase while simultaneously clearing it.

The McConnell measure includes a provision that automatically boosts the debt ceiling by $100 billion the moment the president submits his request to Congress. This way, the debt ceiling negotiations could run right up to the August 2 deadline, and the debt limit could be instantly increased, assuming the McConnell legislation becomes law.

Democrats are privately very happy that McConnell offered his proposal, but they don't want to publicly embrace it right away for fear of turning off Republicans or otherwise jinxing the deal.

They like the plan because it gets them out of the default mess; it avoids the deep spending cuts they feared would come from a grand deal with Republicans; and it avoids cuts to entitlements.

It doesn't give them revenue increases that many Democrats were insisting on, but it appears they can live with that.

Republicans like the plan because it avoids default and the political blame they fear they would get for it; it allows them to come back and fight and campaign for deep spending cuts, since the plan calls for three separate votes leading up to the 2012 election; and it puts the responsibility for the increased debt almost solely on the president.

It also means they won't have to vote for tax increases that Democrats were pushing in a broader debt reduction package.

Reid and McConnell are now talking about adding two important components to the proposal, congressional aides in both parties say. One would set up a commission modeled after the Defense Base Closure and Realignment Commission, or BRAC, which successfully closed hundreds of military bases after politicians could not agree to do so.

The idea, which is still being formulated, would have an equal number of House and Senate Democrats and Republicans develop a plan to reduce the debt -- through entitlement cuts, spending cuts, tax increases and other measures -- and then turn it over to the House and Senate, which could vote up or down on the proposal but not amend it.

The two Senate leaders also are considering adding from $1 trillion to $1.5 trillion in spending cuts to the package as a way to both attract House Republicans to the plan and carry out cuts that even Democrats think are necessary at this time of fiscal crisis.

Aides from both parties say the cuts in question come from those that were identified in negotiations led by Vice President Joe Biden, though they remain a moving target. Aides say the cuts might be added to the legislation when the House takes up the bill as a way to help provide political cover for Republicans reluctant to vote for the plan.

These cuts would be separate from what a BRAC-type commission might recommend down the road. They would go into effect when the McConnell-Reid legislation is signed into law -- presumably by August 2 at the latest.

While negotiations are still under way about what exactly will go into the McConnell-Reid bill, two Democratic leadership aides say it will come to the Senate floor this week. Attorneys are already drafting it into legislative text so it will be ready to go as soon as the final components are agreed to, aides say.