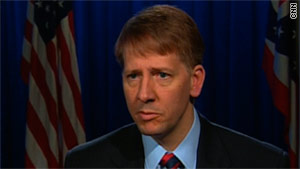 Tune in to "The Situation Room with Wolf Blitzer" today at 5 p.m. ET as Wolf talks to Elizabeth Warren about the new Consumer Financial Protection bureau she helped create.

The announcement means Obama has passed over Elizabeth Warren, the firebrand law professor who envisioned the bureau.

If confirmed, Cordray's pick sets up formal leadership for the bureau created under the Wall Street reform bill passed last year. However, many Senate Republicans have vowed to block any nominee to head the bureau, which they argue lacks transparency and accountability.

Warren was staunchly opposed by many business interests as well as members of Congress, and with an election year approaching, it was never clear if Obama would have chosen her for the post.

As an assistant to the president, Warren is currently setting up the bureau until a permanent director is confirmed. She issued a statement supporting the nomination of Cordray, a former Ohio attorney general who currently serves as the chief enforcement officer for the bureau.

"Rich has always had my strong support because he is tough and he is smart -- and that's exactly the combination this new agency needs," Warren said. "He was one of the first senior leaders I recruited for the agency, and his work and commitment have made it clear that he will make a stellar director."

The liberal advocacy group MoveOn.org called for Cordray to match Warren's commitment to protecting the rights of consumers.

"Nominating Elizabeth Warren would have sent the strongest possible message that when it comes to our ailing economy, the president sides with folks who are hurting over the Wall Street banks that helped send our economy over a cliff," the group said in a statement, adding that its 5 million members "will now be looking to Mr. Cordray to prove to be the same kind of tireless fighter for the middle class that Elizabeth is."

In a statement to Cordray's hometown paper, The Columbus Dispatch, Obama said: "Richard Cordray has spent his career advocating for middle class families, from his 10 years as Ohio's Attorney General, to his most recent role as heading up the enforcement division at the (bureau) and looking out for ordinary people in our financial system."

As attorney general, Cordray fought mortgage servicers and multiple servicing companies. He was a strong advocate for the creation of the Consumer Financial Protection Bureau.

The bureau was the brainchild of Warren, a former law professor, who envisioned it as a government force to protect consumers from increasingly sophisticated financial practices that used small consumer mortgages and loans to finance billion-dollar global financial deals.

The bureau is intended to make basic financial practices such as taking out a mortgage or loan more clear and transparent while ferreting out unfair lending practices.

In a May 5 letter to Obama, 44 Republican senators said they would block any nominee to head the bureau unless changes were made to how it operates. The letter called for having a managing board for the bureau, rather than a single director; having the bureau get its funding through the congressional appropriations process; and setting up a mechanism to oversee regulations set for financial institutions.

Warren was such an outspoken critic of the nation's big banks that she became a darling of the progressive left. However, she also drew the ire of the financial community and congressional Republicans, who vowed to block any effort to make her the bureau's leader.

Progressive activists have continued to lobby the White House to keep Warren on as the bureau head.

"With her track record of standing up to Wall Street and fighting for consumers, Elizabeth Warren was the best qualified to lead this bureau that she conceived -- and we imagine Richard Cordray would agree," said a statement by Stephanie Taylor, co-founder of the Progressive Change Campaign Committee. "That said, Rich Cordray has been a strong ally of Elizabeth Warren's and we hope he will continue her legacy of holding Wall Street accountable."

In his statement to The Columbus Dispatch, Obama thanked Warren "for her work standing up the new agency."

"This agency was Elizabeth's idea, and through sheer force of will, intelligence, and a bottomless well of energy, she will make and continue to make a profound and positive difference for our country," Obama's statement said.

Warren came to Washington from Harvard University, and there has been speculation in Democratic circles that she might return to Massachusetts and mount a campaign to challenge Republican Sen. Scott Brown.

Warren is expected to return to Harvard this fall, a person close to her told CNN Monday.

The person would not talk about any potential Warren Senate candidacy.