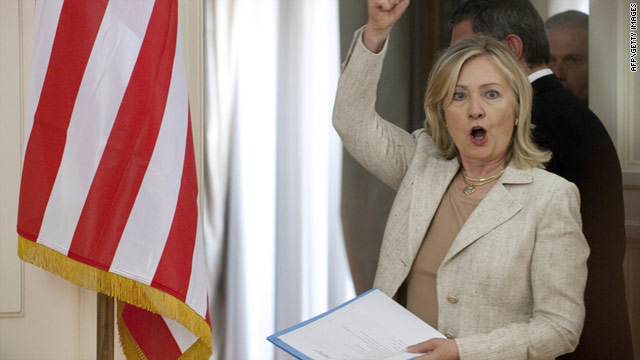 Secretary of State Hillary Clinton shows her support for the U.S. women's soccer team at a conference in Greece on Sunday.
STORY HIGHLIGHTS

Athens, Greece (CNN) -- U.S. Secretary of State Hillary Clinton has some apple picking to do.

Clinton placed a bet on the women's World Cup finals with her Japanese counterpart -- New York apples for Japanese pears.

Clinton alluded to the bet in a phone call she placed to the U.S. team to wish them luck ahead of the game. At the time, she didn't say what the bet with Japan's Foreign Minister Takeaki Matsumoto entailed.

"I am sorry I can't be there with you tonight, but I sent my very best good luck charm for one extra bit of luck: my daughter Chelsea," Clinton told them.

Her daughter Chelsea Clinton was among those who attended Sunday's game in Frankfurt, part of a delegation that included Jill Biden, wife of the U.S. vice president.