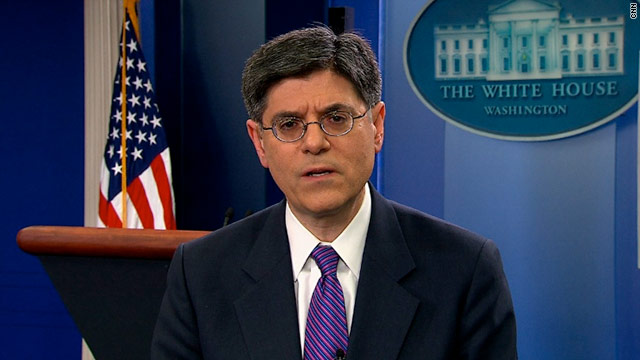 Washington (CNN) -- If the White House has a plan for how it will deal with a potential default on its bills, budget director Jacob Lew wasn't talking about it Sunday.

"There is no plan other than meeting our obligations," Lew told CNN's "State of the Union" when asked how the government would spend revenues that make up about 60% of obligations if Congress fails to allow it to borrow more money by August 2.

President Barack Obama and congressional leaders have been negotiating a possible deficit reduction that would clear the way for congressional Republicans to back an increase in the federal debt ceiling, which has reached its $14.3 trillion legally permitted maximum.

While discussions continued over the weekend after the last full negotiating session Thursday, no significant progress has occurred and the chances for a comprehensive deficit deal sought by Obama in coming weeks appear remote.

Without a major deal, Congress would have to focus instead on a smaller agreement to raise the debt ceiling or face the unprecedented situation in 16 days of the government not having enough money to pay all its bills.

Senate leaders are working on a possible debt ceiling measure, based on a plan that Senate Minority Leader Mitch McConnell, R-Kentucky, unveiled last week. That plan would give Obama power to raise the borrowing limit by a total of $2.5 trillion but also require three congressional votes on the issue before the 2012 general election.

How Giuliani would negotiate debt talks

Graham has no confidence in compromise

According to Senate aides from both parties, a revised version of the McConnell plan being put together with Senate Majority Leader Harry Reid, D-Nevada, could come up for consideration this week, but only after legislators vote on Republican measures calling for spending cuts, caps on future spending and a balanced budget amendment to the Constitution.

While the GOP measures are expected to fail, the votes would satisfy a Republican desire to get Democrats on the record with their opposition to them.

Leaders from both parties say the McConnell-Reid plan is not the preferred option, but they don't rule it out if efforts to strike a broader deal fail.

"The minimum is I believe the debt will be extended," Lew told the ABC program "This Week." "... Our efforts over the next days will be to, in addition to that, do as much as we possibly can to make the tough decisions" needed for a broader deal.

Obama warned last week that he could not guarantee older Americans will receive their Social Security checks next month if a deal is not reached. GOP leaders accused the president of resorting to scare tactics.

"This is a different situation than the United States has ever faced," Lew said of a possible default. He refused to discuss how spending might be prioritized, saying, "Once one gets into the business of trying to ask about setting priorities, it misses the fundamental question, which is that it's unacceptable for the United States to be in a place where -- whether it's a Social Security recipient or a soldier or somebody who is just owed money by the government -- can't be paid because we have not done our job."

How debt ceiling could affect your finances

Republicans complained that they have offered the only concrete proposals to address mounting deficits and federal debt so far, from a House budget proposal earlier this year to the "cut, cap and balance" plan pushed by conservatives that comprises spending cuts, caps on future spending as a percentage of economic production and a balanced budget amendment to the constitution.

"I'm a little frustrated that -- you've heard it in the press conference of the president, you've heard it today from the administration's spokesman -- they are never willing to be specific about the reductions in spending that they would be willing to do," conservative Sen. Jon Kyl, R-Arizona, said Sunday.

"The president always just holds out this idea that, well, if you'll raise taxes, and he is very specific about the taxes he wants to raise, then (he) might be willing to look at cuts elsewhere," Kyl said. "Well, of course, that's just not good enough. So, the point I'm trying to make is when the president says he's willing to compromise, understand why Republican leaders have been pretty reluctant to go along with this deal because we frankly don't know where the spending reductions come, but we do know where the taxes are."

Democrats said the Republican proposals won't pass, and they called for their GOP colleagues to work with them on reaching a compromise that would get the debt ceiling raised and include significant deficit reduction steps to signal markets that the United States is taking serious measures.

"This notion that we somehow have to change the Constitution to do what we were elected to do is just plain wrong," Sen. Dick Durbin, D-Illinois, said on the NBC program "Meet the Press." "Bottom line is, those who want to push a balanced budget amendment are saying, 'I can't promise you that I won't steal again, but I will vote for the Ten Commandments.' "

Obama evoked compromises of the past in calling Saturday for a commitment to shared sacrifice to break the current impasse on the debt ceiling.

"Let's be honest. Neither party in this town is blameless," the president said in his weekly address. "Both have talked this problem to death without doing enough about it. That's what drives people nuts about Washington."

Obama reiterated his call for higher taxes on the wealthy and reforms to politically popular entitlement programs such as Medicare and Social Security. He cited budget deals forged by President Ronald Reagan and Democratic House Speaker Tip O'Neill as well as President Bill Clinton and Republican Speaker Newt Gingrich, crediting them with making sacrifices that benefited the common good.

"We are all part of the same country. We are all in this together," Obama said.

Republicans, meanwhile, renewed their call for an amendment to require a balanced budget.

"The only reason this administration doesn't want a constitutional amendment is because they want to keep spending the American people's money," Sen. Orrin Hatch of Utah said in the GOP response Saturday. "And the only reason congressional Democrats would refuse to pass it, is because they know the people of this country would rise up and quickly ratify it."

Lew said Sunday that the kind of constitutional change sought by Republicans would be "quite draconian" by imposing strict spending limits rather than simply requiring a balance between revenue and spending.

He called for Republicans to compromise in their opposition to any kind of tax increase, saying, "We need a partner to work with.

"We need to get the job done now," Lew added, noting that credit rating agencies were warning of a downgrade for the United States. "The whole world is watching."

What happens on August 3?

The tense negotiations between top Democrats and Republicans, reflecting core ideological principles on taxes and the size of government, have become a race against the clock. If Washington lacks the money to pay its bills, interest rates could skyrocket and the value of the dollar could decline, among other things.

The seriousness of the situation was reinforced Thursday when a major credit rating agency, Standard and Poor's, said it was placing the United States' sovereign rating on "CreditWatch with negative implications." Moody's Investors Services -- another major rating agency -- said Wednesday that it would put the sterling bond rating of the United States on review for possible downgrade.

Hatch argued that Obama refuses to reform entitlement programs and is pushing "job-killing tax hikes." The six-term senator had his own view of the deal brokered between Clinton and House Republicans.

"We've been down this road before," he said. "In 1990, Congress and the president struck a deficit reduction deal that combined spending cuts with tax increases. Unfortunately, while the tax hikes remained, the spending restraint did not, and our debt has marched higher."

House Republicans show no sign of accepting higher taxes on the rich as part of a so-called "balanced" approach to debt reduction. GOP leaders, who consider tax hikes detrimental to the economy, blasted the president Friday morning for failing to produce what they consider to be a legitimate spending cut plan.

No formal negotiating sessions took place over the weekend. On Saturday, internal discussions continued at the White House a day after a meeting involving Treasury Secretary Tim Geithner, Chief of Staff Bill Daley, House Speaker John Boehner, R-Ohio, and House Minority Leader Eric Cantor, R-Virginia, said a Democratic source familiar with the debt negotiations and a Republican aide, both on condition of not being identified.

Obama has made it clear he still favors a package that generates savings of approximately $4 trillion over roughly the next decade.

Fallback plans that take major entitlement reform and tax hikes off the table may include between $1.5 trillion and $1.7 trillion in savings previously agreed to in talks led by Vice President Joe Biden.

Administration officials have also discussed extending and possibly expanding the payroll tax cut -- a nod to sagging employment figures -- as well as extending unemployment insurance, according to a Democratic official familiar with the talks.

One of the issues at the heart of the current debate is Obama's call for more tax revenue by allowing tax cuts from the Bush presidency to expire at the end of 2012 for families making more than $250,000. His plan would keep the lower tax rates for Americans who earn less.

Obama noted earlier this week he is not looking to raise any taxes until 2013 or later. In exchange, the president said, he wants to ensure that the current progressive nature of the tax code is maintained, with higher-income Americans assessed higher tax rates.