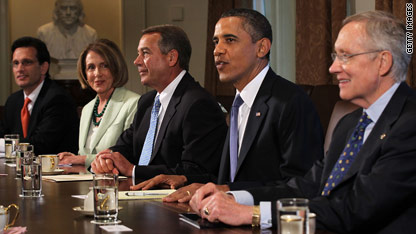 Washington (CNN) -- A fourth straight day of negotiations intended to head off a possible government default ended on a tense note Wednesday, with House Majority Leader Eric Cantor and President Barack Obama squaring off over the Republican's call for a short-term extension of the federal debt ceiling.

At one point, Obama said the political wrangling confirmed what the public considers to be the worst of Washington, according to Democratic sources familiar with the talks who spoke on condition of not being identified.

Multiple sources, also speaking on condition of anonymity, said Obama told the gathering that "this could bring my presidency down," referring to his pledge to veto any short-term extension of the debt ceiling. Sources say he vowed, "I will not yield on this."

The exchange concluded almost two hours of talks that failed to achieve a breakthrough. Another session -- the fifth in five days -- was set for Thursday, participants said.

The seriousness of the situation was reinforced when a major rating agency said Wednesday it would put the sterling bond rating of the United States on review for possible downgrade.

Moody's Investors Services said it had initiated the review because of "the rising possibility" that Congress will fail to raise the debt ceiling in time -- something that could lead to a U.S. default on its debt.

Behind the scenes of debt negotiations

Cantor, R-Virginia, told reporters after Wednesday's meeting that he proposed a short-term agreement to raise the federal debt ceiling, a position Obama has previously rejected.

"That's when he got very agitated and said I've sat here long enough -- that no other president -- Ronald Reagan -- would sit here like this -- and that he's reached the point that something's gotta give," Cantor said, adding that Obama called for Republicans to compromise on either their insistence that a debt-ceiling hike must be matched dollar-for-dollar by spending cuts or on their opposition to any kind of tax increase.

"And he said to me, 'Eric, don't call my bluff.' He said 'I'm going to the American people with this,' " Cantor quoted Obama as saying.

"I was somewhat taken aback," Cantor said. When he continued to press the issue, Cantor said, Obama "shoved back from the table, said 'I'll see you tomorrow' and walked out."

The Democratic sources provided a different take on the exchange, saying Obama cut off Cantor at the end after the Virginia Republican changed from a previously held position against a short-term extension of the debt ceiling.

Obama responded that he'd veto such a temporary measure, according to the sources, then went on to say that what was happening in the negotiations confirmed the worst of what the American people think about Washington.

According to the sources, Obama expressed frustration with the unwillingness of congressional Republicans to compromise and called on them to stop posturing and catering to their bases. He then ended the meeting, the Democratic sources said.

Obama has insisted on one deal that will raise the amount of money the government can borrow to sufficient levels to last through 2012 -- after his campaign for re-election. Cantor's call for a short-term agreement also could win the support of House Speaker John Boehner, R-Ohio, an aide to Boehner said.

Democrats and Republicans remain at sharp odds over how to proceed. Obama has indicated a preference for a "grand bargain" that would save up to $4 trillion over the next decade through a combination of spending cuts, raising taxes on the wealthiest Americans and reforming politically popular entitlement programs such as Medicare and Medicaid.

GOP leaders remain adamantly opposed to any tax hikes, arguing that increasing the burden on "job creators" now would derail what has already proven to be, at best, a shaky economic recovery.

On Tuesday, Obama said he cannot guarantee that older Americans will receive their Social Security checks next month if a deal is not reached.

"There may simply not be the money in the coffers to do it," the president told CBS News.

Testifying Wednesday on Capitol Hill, Federal Reserve Chairman Ben Bernanke warned that failure to raise the ceiling would create a "major crisis" and be potentially "catastrophic" for the global economy.

Specifically, McConnell claimed an administration official had only been able to identify $2 billion in spending reductions when asked what cuts the White House would agree to next year -- a tiny fraction of roughly $4 trillion in deficit reduction savings Obama has claimed he's interested in generating over the next decade.

"Republicans refuse to be drawn into this legislative trap," McConnell said, adding that the White House is "not serious about cutting spending or debt."

On Tuesday, McConnell unveiled what he characterized as a last-ditch plan to avert a default if negotiators can't reach an agreement. The Republican leader proposed three short-term increases in the amount the government can borrow while at the same time registering the disapproval of Congress for such a move.

McConnell's proposal would give Obama power to raise the debt ceiling by a total of $2.5 trillion, but also would require three congressional votes on the issue before the 2012 general election. The president would be required to identify spending cuts equivalent to each debt ceiling increase, though there would be no guarantee Congress would adopt the proposed cuts.

While some congressional Democrats promised to consider the plan, Obama has made clear his opposition to any short-term extension of the debt ceiling.

However, Cantor's statement Wednesday that no viable proposals have emerged was intended to show the McConnell plan had no chance of winning approval from the House, Republican congressional sources said.

Some conservatives are accusing McConnell of capitulating to the Democrats. The website redstate.com posted a story Tuesday with the headline: "Mitch McConnell Just Proposed the 'Pontius Pilate Pass the Buck Act of 2011.' "

In an interview Wednesday with Mandy Connell of WHAS radio, McConnell said his proposal was necessary because an acceptable deficit reduction deal was proving unattainable and the United States must avoid a default that would be "bad for Republicans."

"Given a choice between a bad deal and avoiding default, I choose to avoid default," McConnell said, adding that "if we were to go into default ... the practical effect of that will be to allow the president to make us co-owners of a bad economy."

He also said defaulting is "completely and totally unacceptable, and it's not going to happen."

After Wednesday's meeting, Cantor told reporters that "no one wants to rattle the markets."

Rep. Michele Bachmann, R-Minnesota, unveiled an alternative fallback plan Wednesday, introducing legislation designed to ensure members of the military and holders of U.S. debt are paid in the event the debt ceiling isn't raised. Bachmann, a conservative tea party favorite and 2012 presidential contender, accused Obama of "holding the full faith and credit of the United States hostage so that he can continue his spending spree."

In response, Carney told reporters that Bachmann's proposal amounts to accepting a U.S. default on its obligations, rather than offering a serious effort to prevent it from happening.

For now, it remains unclear at best whether the two sides will be able to reach any agreement. Cantor said that during Tuesday's negotiating session at the White House, Obama presented more details of his proposed cuts to entitlement programs. Republicans, according to Cantor, supported much of what they heard.

On Wednesday, Cantor reiterated GOP opposition to higher taxes and called on Obama to make public the details of what he is proposing in the negotiations "so that both Republicans and Democrats can make well-informed decisions about something of this magnitude."

Asked about going public with details of entitlement reforms being discussed, Carney told reporters that would run counter to the negotiating process and the principle that "nothing is agreed to until everything is agreed to."

At the heart of the Republican resistance is a bedrock principle pushed by conservative crusader Grover Norquist against any kind of tax increase. A pledge pushed by Norquist's group, Americans for Tax Reform, has been signed by more than 230 House members and 40 senators, almost all of them Republicans.

However, a letter to Obama and legislators Tuesday from leading business figures and associations urged them to put aside hard-line partisan positions in order to reach a deal.

"Our political leaders must agree to a plan to substantially reduce our long-term budget deficits with a goal of at least stabilizing our nation's debt as a percentage of GDP (gross domestic product) -- which will entail difficult choices," said the letter from the U.S. Chamber of Commerce and others known for traditionally supporting Republicans.

Obama noted earlier this week he is not looking to raise any taxes until 2013 or later. He claimed he has "bent over backward to work with the Republicans" and not force them to vote on any revenue hikes in the short term -- a politically toxic move for the GOP's conservative base.

For his part, Treasury Secretary Tim Geithner warned that time is running out. The secretary said he wants to see a deal to raise the debt limit and cut projected spending by the end of this week -- or next week at the latest -- so that Congress will have enough time to turn the deal into law.