It's dog vs. machine at congressional hearing on airport security 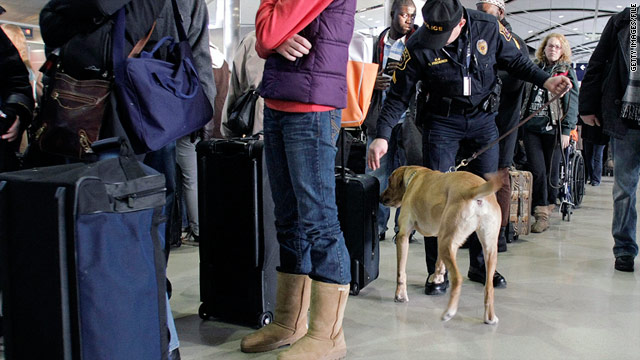 Washington (CNN) -- What is the best way to search travelers for explosives: Full-body Imaging machines, which can see through your clothes? Or Rin Tin Tin, who can't, but might lick your hand?

That, unexpectedly, became the most contentious issue at a fiery congressional hearing Wednesday on airport security.

In a sometimes blistering, sometimes comical debate, Republican lawmakers, a canine officer and a Transportation Security Administration official argued over the relative merits of dog vs. machine in assuring the national security.

Rep. Jason Chaffetz, R-Utah, led the dog caucus, arguing that canines are cheaper and less invasive than body scanners. Dogs are exceptional at sensing explosives, do not require software upgrades, don't depreciate with use and might even be able to detect bombs implanted under a person's skin.

"The single best way to find a bomb-making device or bomb-making materials is the canine," Chaffetz said.

And dogs are widely accepted by the public, he said.

Canines are missing one thing that body scanners have, Chaffetz said. Lobbyists.

"That's what the problem is," Chaffetz said. "If you look at those lobbyists who pushed through those machines, they should be ashamed of themselves, because there is a better way to do this and it's with the canines."

Transportation Security Administration Assistant Administrator John Sammon noted the TSA has fielded both body scanners and canines. But dogs have limitations, he said. They require frequent breaks, he said, while the imaging machines can be worked tirelessly.

And he said, a dog can cost "hundreds of thousands of dollars."

"How do you come up with hundreds of thousands of dollars. I mean Alpo only costs so much," Chaffetz said. "I challenge you to verify that number."

Sammon said the cost of trainers and handlers is substantial.

"I assume that your whole-body imaging machines require an operator too," said dog fancier Rep. Blake Farenthold, R-Texas. The machine at his local airport requires three, he said. "One to stop you going through, one to listen on the (walkie talkie), and the one in back (to review the image)."

Dogs and machines are both "expensive systems," Sammon allowed. "They each have their role."

But Chaffetz maintained dogs are more efficient and proposed a contest.

"Let's do this," Chaffetz challenged Sammon. "You take a thousand people and put them in a room, I'll give you 10 whole-body imaging machines. You give me 5,000 in another room. You give me one of his dogs and we will find that bomb before you find your bomb," he said.

"Scientifically, right now there's no data that says a dog can or cannot," Parker said. But he noted that dogs can detect cancer and tumors. "Dogs can detect anything that they're taught. I think if the dog is taught to do that, he'll be a very good asset for that."

TSA officials have told Congress that body scanners can not detect implanted devices, although they may detect modifications to body contours.

Sammon promised to look into the cost of dogs and report back to Congress.