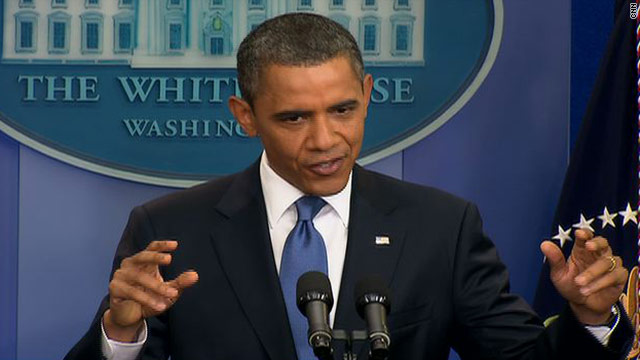 "There may simply not be the money in the coffers to do it," Obama said, according to excerpts of a CBS News interview scheduled to air Tuesday night.

"We can't guarantee -- if there were a default -- any specific bill would be paid," White House Press Secretary Jay Carney told reporters Tuesday afternoon.

Top lawmakers from both sides of the aisle met with Obama for almost two hours at the White House later Tuesday, and another session was scheduled for Wednesday, according to House Majority Leader Eric Cantor, R-Virginia.

Cantor also said Obama presented more details of his proposed cuts to entitlement programs such as Medicare, and that Republicans support what they heard. However, Cantor reiterated GOP opposition to higher taxes, which is the main sticking point to a deal.

According to a senior Democratic official familiar with the discussions, the mood after the Tuesday meeting was weary as participants tired of hearing the same talking points from both sides.

While no breakthrough occurred, Obama reiterated that potential consensus exists for more than $1.5 trillion in spending cuts negotiated in previous talks led by Vice President Joe Biden, but that he wanted increased tax revenue as part of an agreement.

Administration officials have warned that a failure to raise the current $14.3 trillion ceiling by August 2 could trigger a partial default. If Washington lacks the money to meet its bills, interest rates could skyrocket and the value of the dollar could decline, among other things.

In a letter to Obama and legislators, leading business associations urged them to put aside hard-line partisan positions in order to reach a deal.

"Our political leaders must agree to a plan to substantially reduce our long-term budget deficits with a goal of at least stabilizing our nation's debt as a percentage of GDP (gross domestic product) -- which will entail difficult choices," said the letter from the Chamber of Commerce, the Business Roundtable, the Financial Services Forum, the National Association of Manufacturers and the Partnership for New York City.

Asked by reporters about the letter, Carney responded: "We couldn't have said it better and we agree."

Negotiators have been debating trillions of dollars in possible savings over the next decade, a response to GOP demands for significant spending cuts in exchange for any debt ceiling increase. Democrats are furious, however, that Republicans refuse to consider any tax hikes as part of a deal.

Obama: 'Now is the time' to tackle debt

However, Republicans continued their rejection of any kind of tax increase.

Conservative Sen. John McCain, R-Arizona, told CNN that his party promised to cut spending, not raise taxes, when it won big gains in last November's congressional elections. At the same time, McCain said he was open to eliminating some tax loopholes and subsidies for the oil industry and others.

In addition to ruling out tax increases, House Speaker John Boehner, R-Ohio, has also said overall spending cuts must exceed the size of any debt ceiling increase, and that new restraints must be imposed on future spending.

Senate Minority Mitch McConnell, R-Kentucky, said he has lost any hopes of a "grand bargain" with the White House.

"As long as this president is in the Oval Office a real solution (to the country's fiscal problems) is unattainable," McConnell said. Obama "will do almost anything to protect the size and the scope of Washington, D.C.'s burgeoning bureaucracy."

House Speaker John Boehner asserted Tuesday that Obama "talks a good game" when it comes to making concessions for a deal, but "can't quite pull the trigger."

McConnell accused the administration Tuesday of using "smoke and mirrors" in its proposals.

For their part, Democrats also dug in their heels.

Republicans want to "protect the wealthiest among us -- the millionaires and billionaires -- and hurt the average, middle-class senior citizen," said Sen. Chuck Schumer, D-New York. "This approach is not balanced. It is not fair. It is not moral, and it will not be accepted."

As the rhetoric intensified, Treasury Secretary Tim Geithner warned that time is running out. The secretary said he wants to see a deal to raise the debt limit and cut projected spending by the end of this week -- or next week at the latest -- so that Congress will have enough time to turn the deal into law.

"We know we don't have a lot of time," Geithner said. "Default is not an option."

Any failure to reach a deal would "cause the stock market to crash," predicted Senate Majority Leader Harry Reid, D-Nevada.

Before meeting with Obama at the White House, Senate Republicans offered a fallback option to the debt ceiling impasse, proposing three short-term increases in the amount the government can borrow while at the same time registering the disapproval of Congress for such a move.

The proposal would give Obama power to raise the debt ceiling, but also would require three congressional votes on the issue before the 2012 general election. Obama said Monday he would reject any short-term extension of the debt ceiling, as called for in the Senate Republican plan.

McConnell told reporters the proposal was intended to ensure a debt ceiling increase if no agreement is reached to avoid a government default.

After Tuesday's negotiating session at the White House, Democratic Sen. Dick Durbin of Illinois told CNN that the Republican plan was being discussed "as one of the options."

Noting that Republicans have pushed for decisive action on debt reduction, Obama urged them to compromise from their blanket refusal to end Bush-era tax cuts for wealthy Americans. The president said he'd be willing to push Democrats to do something they don't like -- reform Medicare and other entitlement programs that are the party's political legacy -- in an effort to reach his goal of trimming the deficit by $4 trillion.

Monday's meeting with Hill leaders included a detailed review of a possible smaller deal based on terms that emerged from the Biden talks.

Republicans demand that spending cuts must exceed any debt ceiling increase, and Obama argued that that bridging the difference between the spending cuts agreed to in the Biden talks and the debt ceiling total he wants would require raising revenue, the Democratic sources said.

Negotiators are trying to salvage a deal after Boehner pulled back over the weekend from Obama's preferred $4 trillion plan. The deal reportedly fell apart over a dispute regarding eventual tax increases for the wealthiest Americans by allowing the Bush-era tax cuts to expire at the end of 2012.

Boehner has said that any such revenue-raising initiative would prevent the bulk of Republicans from supporting a more ambitious deal, even if it was one that included cutting spending and reforming entitlement programs.

During a meeting with House Republicans Tuesday morning, Boehner insisted that, contrary to some reports, he has consistently ruled out any tax increase.

"Comprehensive tax reform" had been discussed as a way to "generate additional revenue through economic growth," Boehner said, according to a prepared text of his remarks obtained by CNN from a GOP source in the room.

The tax reform talks broke down, Boehner claimed, because Obama wanted to "increase the 'progressivity' of the current system" -- a reference to Democrats' demand for more revenue from the wealthiest taxpayers.