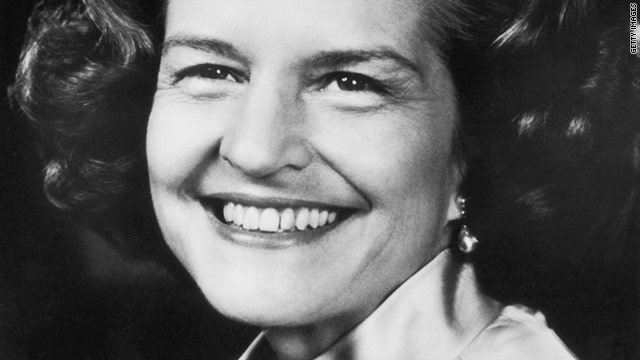 (CNN) -- Former first lady Betty Ford was remembered Tuesday as a woman whose disclosures about her personal battles showed courage and grace and brought encouragement to others.

"She was a tireless advocate for those struggling," said former first lady Rosalynn Carter. "She was never afraid to speak the truth."

Ford, who died Friday at age 93, raised awareness of issues involving women's rights, cancer, alcoholism and substance abuse during and after her stint as first lady.

Carter, close friends with Ford, also recalled their work together as advocates for those with mental illness.

A former president and first ladies present and past joined family members Tuesday afternoon at the first of two services for Ford.

It may have been the words of a board member at the alcohol and substance abuse treatment center in Rancho Mirage, California, which bears Ford's name, that most captured her spirit and devotion to others.

Addressing her casket, Mason talked about how Ford encouraged others to peel away sadness, anger and guilt as they regained sobriety.

He cited the former first lady's battle with alcohol and painkiller abuse.

"Maybe, just maybe if we worked at it like you told us to, maybe we also could get some relief from the darkness that we had become almost comfortable with."

"Thank you God for bringing us this extraordinary lady," Mason said. "This brave and inspirational pioneer into our lives."

Roberts said the former first lady asked her to stress in her eulogy the camaraderie once common in Congress.

"That friendship made governing possible," Roberts told the mourners.

Roberts read from Proverbs 31, a praise of the good wife: "Charm is deceptive, and beauty is fleeting; but a woman who fears the Lord is to be praised."

Michael Ford spoke of his mother's dancing skills, her love for her husband and her ability to connect with people in their brokenness.

In remarks to reporters Monday, Clinton said she is "grateful for having known" Ford.

"Her commitment to speaking out on issues that, before she took them on, were just not discussed made a huge difference in the lives of Americans," Clinton said.

"I remember well when my mother's best friend was dying of breast cancer; nobody talked about it in those days," she continued. "But Betty Ford made it acceptable" to discuss the issue in public.

While Clinton, the current secretary of state, was in Palm Desert, her husband, former President Bill Clinton, was not at the service because of problems with the aircraft he was to take, said Ford spokeswoman Barbara Lewandrowski. He will attend Thursday's service at Grace Episcopal Church. Former first lady Barbara Bush also will attend.

CNN's Elise Labott and Tom Cohen contributed to this report.