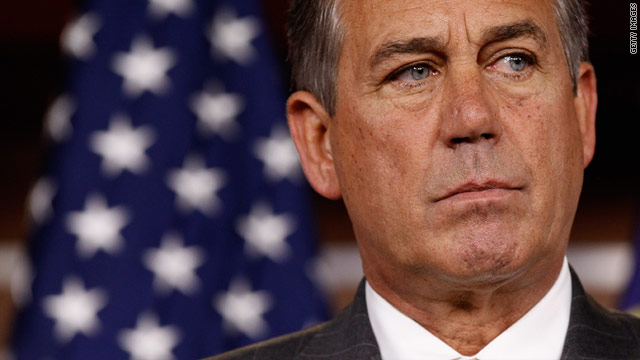 Speaker John Boehner said his focus remains on "spending reforms and cuts greater than the amount of the debt limit increase."
STORY HIGHLIGHTS

However, Boehner said in a statement Saturday that parameters of these and future discussions will be scaled back -- such that they will be less bold than what the Obama administration had requested.

"Despite good-faith efforts to find common ground, the White House will not pursue a bigger debt reduction agreement without tax hikes," Boehner said. "I believe the best approach may be to focus on producing a smaller measure, based on the cuts identified in the Biden-led negotiations, that still meets our call for spending reforms and cuts greater than the amount of the debt limit increase."

A Republican source familiar with the talks told CNN that they broke down after the White House resisted proposals Boehner had offered. The source added that a gulf remains "between the speaker and the White House on the issue of medium- and long-term structural reforms."

But the White House said Saturday that it will continue to push for a bigger deal, one that it hoped would take a "balanced approach." Communications director Dan Pfeiffer said that to "back off now will not only fail to solve our fiscal challenge, it will confirm the cynicism people have about politics in Washington."

"The president believes that now is the moment to rise above that cynicism and show the American people that we can still do big things," Pfeiffer said in a statement Saturday. "And so (Sunday), he will make the case to congressional leaders that we must reject the politics of least resistance and take on this critical challenge."

Vice President Joe Biden had been a key figure in continuing efforts to help hammer out an agreement to raise the nation's $14.3 trillion debt ceiling.

Taking on the budget

GOP asks 'Where are the jobs?'
RELATED TOPICS

The Treasury Department has warned that failure to do so by August 2 could lead to a possible default, which could push interest rates to skyrocket and cause the dollar to plummet. But Republicans, including those controlling the House, have insisted on large-scale budget cuts before raising the ceiling.

Both parties have thus far been unable to reconcile their radically divergent strategies to solve the nation's economic crisis, as Republicans refuse to raise taxes in a weak economy and Democrats denounce proposed cuts to entitlement programs as draconian and unacceptable.

President Barack Obama had signaled a willingness to include reforms to popular entitlement programs such as Social Security and Medicare as part of a broad agreement for $3 trillion to $4 trillion in deficit cuts over the next decade, said Democratic officials familiar with the negotiations.

But Boehner's announcement Saturday appears to diminish the chances for such a sweeping deal, although he kept open the door for some sort of less grand agreement.

A spokesman for House Majority Leader Eric Cantor said the group, spearheaded by Biden, has identified "between $2 trillion and $2.5 trillion in spending cuts that could represent the framework of the agreement." But he said that any tax hike cannot, and will not, be part of any deal.

"A tax increase cannot pass the House, and it is the last thing Congress should be doing with so many people out of work," said Brad Dayspring, the Virginia Republican's spokesman.

A House GOP leadership aide said earlier this week that both Cantor and the No. 2 Senate Republican, John Kyl, voiced reservations at a White House meeting Thursday about the prospects for getting a $4 trillion package if it included $1 trillion in new tax revenues. Republicans were hesitant, the aide notes, to agree on any proposals that go much farther than simply closing loopholes.

While he didn't specify what tax hikes, if any, the president had proposed, Pfeiffer said it was important to spread the burden of any deal.

"We cannot ask the middle class and seniors to bear all the burden of higher costs and budget cuts," he said. "We need a balanced approach that asks the very wealthiest and special interests to pay their fair share as well, and we believe the American people agree."

The top party officials in the Senate issued dueling responses Saturday night in the wake of Boehner's announcement.

Don Stewart, a spokesman for Senate Republican Leader Mitch McConnell, said that "we should cut Washington spending without raising taxes on job creators."

Senate Majority Leader Harry Reid, meanwhile, said he was "disappointed that Republicans are unable to work with us to take a dramatic step forward that would have dramatically reduced our deficit."

"We asked Republicans to consider a balanced approach that would have required shared sacrifice, but they would not," said Reid, D-Nevada. "We still need to make sure we avert the economic catastrophe that would occur if we were to let America fail to pay its bills for the first time in our history, and I am confident that we will."