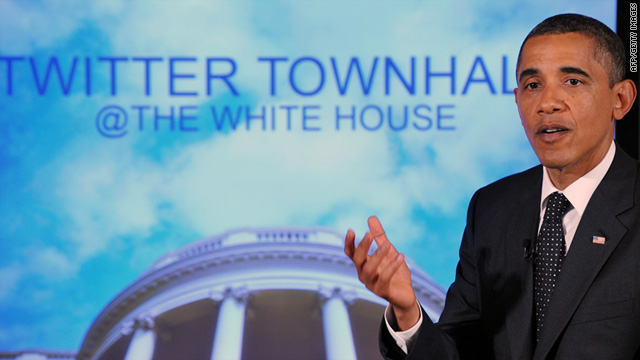 Washington (CNN) -- President Barack Obama said Wednesday he wants a deal with Congress in the next two weeks to tackle mounting deficits and allow an increase in the federal debt ceiling, but he didn't rule out using a constitutional argument to increase how much money the government can borrow.

"I don't think we should even get to the constitutional issue," Obama said during a Twitter town hall at the White House in response to a tweeted question on whether he would rely on a clause in the Fourteenth Amendment to unilaterally raise the debt ceiling.

With congressional leaders heading to the White House on Thursday to continue negotiations, Obama said that people need to "put their dogmas aside" and "their sacred cows aside."

However, Senate Minority Leader Mitch McConnell, who will take part in Thursday's talks, objected to the president's characterization of his side's positions as absolutist or maximalist.

"We have a better term for it -- common sense," McConnell, R-Kentucky, said of GOP opposition to tax increases and more government spending in some areas.

The House returned to work Wednesday from its Fourth of July break, a day after the Senate cut short its recess to come back to Washington, with the two parties at sharp odds over what sort of conditions should be attached to a hike in the current $14.3 trillion debt ceiling.

Who to blame for debt ceiling stalemate?

Republicans are refusing to go along with any debt ceiling increase unless it includes deep spending cuts and avoids any tax increases. Democrats are trying to minimize the impact of cuts to social services and are calling for the elimination to certain tax breaks and loopholes benefiting wealthier Americans.

Treasury Department officials and leading economists have warned of potentially catastrophic consequences, if the ceiling is not raised by August 2, at which point the country could default on its debt obligations. Among other things, the country could face skyrocketing interest rates and a plummeting dollar.

Obama and House Speaker John Boehner met over the weekend as part of the ongoing negotiations on an agreement to reduce the country's deficit, a Republican official told CNN.

Boehner, one of the eight congressional leaders from both parties invited by Obama for Thursday's meeting, indicated that he will take part but warned that Congress will not accept tax increases sought by Obama and Democrats.

"I'm happy to discuss these issues at the White House, but such discussions will be fruitless until the president recognizes economic and legislative reality," Boehner, R-Ohio, said in a statement Wednesday. He added, "I'm pleased the president stated today that we need to address the big, long-term challenges facing our country."

In particular, Boehner and other Republicans oppose Obama's push to end Bush-era tax cuts for the wealthiest Americans, saying such a move would stymie economic growth by adding to the tax burden of small businesses that are the main driver of job creation.

At the Twitter town hall, Obama argued for restoring tax rates on families making more than $250,000 a year to levels from the 1990s, noting that America at that time experienced a high rate of job growth and poverty reduction.

"If the wealthiest among us are willing to give up a little bit more, then we can solve this problem," Obama said. He challenged the Republican argument, saying that a "modest" increase in taxes on wealthy Americans would not affect job creation.

Obama noted that the higher rates of the 1990s, before the Bush tax cuts, were part of a stronger economy than the reduced rates of the next decade, adding that the tax cuts "didn't work" and that "we should go with what works."

Democrats also want to end some tax loopholes and subsidies, such as tax breaks for corporate jet owners and government payments to the oil and gas industry. Republicans have indicated openness to the idea as part of overall tax reform that they say will require more time than the current negotiations allow.

"I'm open to tax reform," McConnell told reporters Wednesday, adding that "we need to do it broadly."

"To sort of cherry pick items in the context of this current negotiation with the White House strikes me as pretty challenging," McConnell said.

The day before, Obama made an unscheduled appearance in the White House briefing room to announce the Thursday meeting. He told reporters that talks on deficit reduction over the Fourth of July weekend with congressional leaders from both parties made progress, but "we still have to work through some real differences."

The three-day July Fourth weekend did little to change the rhetoric of recent weeks over deficit reduction talks and the need for Congress to increase the amount of money the government can borrow.

However, Obama said Tuesday that he's opposed to a short-term increase in the debt ceiling.

Republican Sen. Rand Paul of Kentucky, a favorite of the Tea Party movement, told CNN that the conservatives' demands were intended to tell the government that "you aren't trusted to be spending our money wisely, so we won't give you any more."

CNN's Tom Cohen and Alan Silverleib contributed to this report.