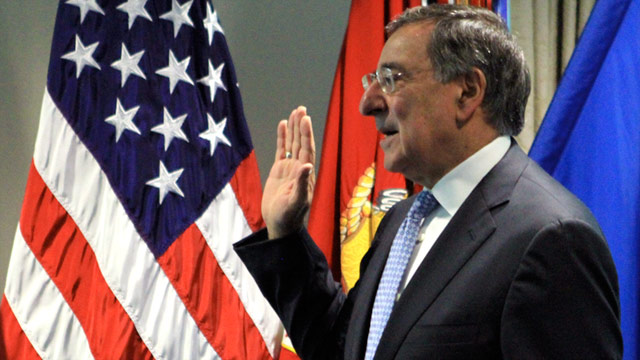 Leon Panetta gets sworn in Friday as U.S. defense secretary in a ceremony at the Pentagon.
STORY HIGHLIGHTS

Panetta, who previously served as CIA director, was confirmed by the Senate last week in a rare 100-0 vote.

"In the weeks and months ahead, I look forward to visiting with troops and civilian employees of every rank and hearing (their) ideas, thoughts, and concerns," Panetta said in a written statement.

"I will ensure that our nation continues to have the best-trained, best-equipped, and strongest military in the world -- a force prepared to confront the challenges that face us."

The new secretary pledged to "persist in our efforts to disrupt, dismantle, and ultimately defeat al Qaeda."

Gates says serving was an honor

Among Panetta's top priorities: overseeing the completion of the U.S. withdrawal from Iraq this year and beginning the process of winding down the unpopular war in Afghanistan.

Approximately 33,000 U.S. "surge" troops are expected to be withdrawn from Afghanistan by next summer, with the remaining 68,000 leaving by the end of 2014.

Panetta will also be responsible for managing limited U.S. involvement in the NATO-led campaign in Libya.

While facing those challenges, the new secretary will also confront the realities of an age of greater fiscal austerity at the Pentagon. Tighter financial constraints, according to numerous analysts, are contributing to a growing emphasis on smaller, more flexible, less costly, and potentially more dangerous military and paramilitary engagements in the years ahead.

Panetta, who took over at the CIA in February 2009, also served as chief of staff to President Bill Clinton between 1994 and 1997. Before that, the California Democrat served as director of Clinton's Office of Management and Budget, a position requiring mastery of tricky fiscal situations and an understanding of the federal government's sprawling bureaucracies.

Panetta served in the House of Representatives from 1977 to 1993, establishing deep congressional ties.

Gen. David Petraeus, currently head of the NATO International Security Assistance Force and U.S. forces in Afghanistan, will replace Panetta at the CIA.

CNN's Charley Keyes and Barbara Starr contributed to this report.