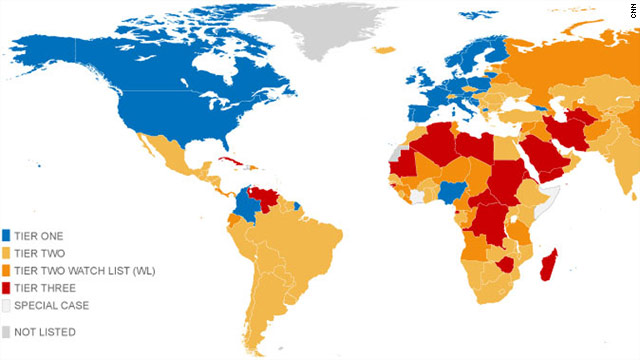 Washington (CNN) -- Human trafficking is flourishing in the Democratic Republic of Congo, North Korea, Saudi Arabia and Iran, with little effort by the countries' governments to combat it, the U.S. State Department said Monday.

The annual report, considered one of the most comprehensive analyses of worldwide human trafficking, ranks countries in three "tiers."

Iran is among the countries the report describes as "a source, transit, and destination country for men, women, and children subjected to sex trafficking and forced labor."

Haiti was on that list for a sixth consecutive year. This year's report says massive destruction in the 2010 earthquake crippled the country's ability to fight trafficking. Ivory Coast and Somalia also were on the list.

The State Department says 27 million people are victims of human trafficking worldwide, and approximately 100,000 of those victims are in the United States.

In the report's preface, Secretary of State Hillary Clinton describes her visit to a shelter for trafficking survivors last year.

"I was embraced by children who should have been in grade school, but were instead recovering from having been enslaved in a brothel," she wrote.

"We know trafficking in persons affects every region and every country in the world, but looking into the eyes of those girls and hearing their stories firsthand brought home for me once again the very real and personal tragedy of modern slavery."

The report looks at how traffickers operate, what kinds of victims are exploited, and most importantly, what governments are -- and in some cases are not -- doing to protect vulnerable people.

While some countries are repeat offenders, the official tasked with coordinating the U.S. response to human trafficking says the State Department has seen a "decade of progress" in developing tools for prevention, protection, and prosecution of traffickers since it released its first human trafficking report 11 years ago,.

For example, 148 countries have signed on to the Palermo Protocol, the international effort headed by the United Nations to combat trafficking, Ambassador Luis CdeBaca said, and 130 countries around the world have enacted laws criminalizing all forms of human trafficking. CdeBaca is in charge of the State Department's Office to Monitor and Combat Trafficking in Persons.

But while there have been advances in addressing the problem, the number of victims identified and the number of traffickers prosecuted has "flattened" around the world, CdeBaca said. The trend, he told reporters in a briefing before the report's release, might be attributed to the global economic crisis and diminished resources for victims.

"When our staff travels out to the field, we're actually meeting with victims on the ground. We're not just in capitals, we're going out to rural areas, visiting shelters, visiting rehabilitative centers, border checkpoints to see how immigration officers are working to screen victims," said the State Department's Christine Chan-Downer, who helped compile the report.

The trafficking report describes the psychological strategies that pimps use to gain control over the millions of victims exploited in the global commercial sex trade.

"They recruit vulnerable women or girls, pretend to be in love with them," the report says, "ply them with alcohol or drugs, build their dependencies for basic needs or chemical escapes, place other women in supervisory roles over them and encourage them to compete for affection and favor, use an interlocking system of reward and punishment reminiscent of a battering relationship, and threaten their recruits with the shame of their families and a punitive, rather than protective, law enforcement response."

In addition to detailing problems many countries face, the report singles out "heroes" who -- sometimes at great threat to their own safety -- fight trafficking.

Charimaya Tamang of Nepal, for example, helped start an anti-trafficking organization. She was 16 years old when she was taken to India, "spending 22 months enslaved in a brothel before the Indian government rescued her and more than 200 other Nepali women in 1996," the report says.

Returning to Nepal, Tamang "faced social stigma and was outcast from her own community," according to the report. "But she courageously filed a case against her traffickers, becoming the first person to file personally a trafficking case with the district police. In 1997, the District Court -- in a landmark decision -- convicted and sentenced eight offenders involved in her case."

But more must be done, the State Department says.

"While some of the accounts in these pages are disquieting," the report concludes, "they are but a faint echo of the daily suffering of trafficking victims. For every hero or survivor highlighted, millions more remain unacknowledged and unnamed. It is time for that to stop."