Obama believes a significant deficit deal is possible this year 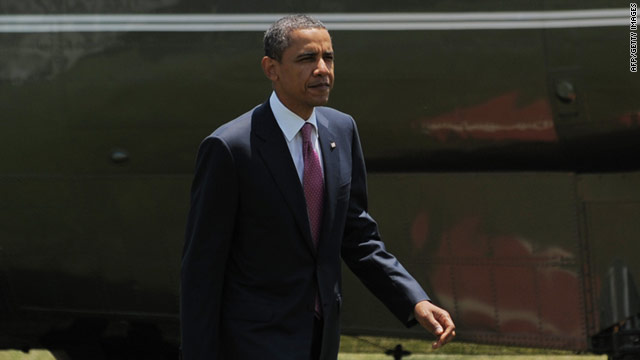 Washington (CNN) -- President Barack Obama believes "a significant deal" on deficit reduction remains possible this year so long as Republicans are willing to accept that no one will get everything they want in the negotiations, White House spokesman Jay Carney said Monday.

Obama met with Senate Majority Leader Harry Reid, D-Nevada, in the morning and later talked for an hour with Senate Minority Leader Mitch McConnell, R-Kentucky, to keep the negotiations going on a possible deficit reduction deal.

The sessions came after talks led by Vice President Joe Biden concluded last week without an agreement and as congressional leaders hardened their positions, making a possible compromise more difficult.

With an August 2 deadline looming to increase the federal debt ceiling or face possible default on debt obligations, pressure is mounting to reach a deal that will prevent market jitters and corresponding harm to the still-recovering economy.

"If everyone is willing to abandon the 'my way or the highway approach' ... we can get a significant deal this year," Carney said.

He made clear that the question of raising tax revenue, which Democrats support and Republicans oppose, is a major stumbling block, and listed a series of possible steps, including the elimination of some tax loopholes and subsidies, as well as limiting deductions for wealthy Americans to a set percentage of total income.

Republican Sen. Jon Kyl of Arizona later confirmed that an impasse over the tax revenue issue ended the Biden-led talks.

"The primary problem there was the insistence by the Democratic negotiators that Republicans agree to tax hikes, something which we think would be inimical to economic growth," Kyl said, later adding that "the White House's insistence that this had to be a condition to approving the reductions in spending that we had been talking about made it impossible for us to go forward at that time."

At the White House, Carney said that cutting both discretionary government spending and military spending is necessary, and called on Republicans to take on a "sacred cow" by backing defense reductions.

Carney's comments indicated that the scope and breadth of the agreement also is an issue. McConnell has indicated that a smaller agreement is possible for now that would cause Republicans to back a short-term increase in the federal debt ceiling.

In remarks Monday on the Senate floor before his meeting with the president, McConnell lambasted Obama's economic policies and said Democrats must drop calls for raising taxes as part of a deficit deal.

"I intend to ask the president what he is prepared to do outside of raising taxes about the massive deficit and debt that have accumulated on his watch," McConnell said, calling tax increases "politically impossible" because of Republican opposition.

On Sunday talk shows, Democrats said they seek a broad approach that makes some spending cuts but also ends some tax breaks to bring in more revenue.

"You cannot achieve what you set out to do if you say it's just about cutting. It has to be about increasing the revenue stream as well," House Minority Leader Nancy Pelosi, D-California, said on CNN's "State of the Union."

Taking aim at GOP leaders, Pelosi noted that Republicans insisted during the eight years of the previous administration that tax cuts would produce jobs.

"They didn't," Pelosi said. "They produced a deficit."

Republicans countered that any increased tax burden would further slow economic recovery. They insisted the government collects enough revenue but spends too much on excessive or unnecessary programs, as well as economically unfeasible entitlement programs such as Medicare and Social Security.

To McConnell, the question is one of political reality -- Republicans control the House and a strong minority in the Senate, and they oppose any tax hike.

"Throwing more tax revenue into the mix is simply not going to produce a desirable result, and it won't pass," McConnell said on the ABC program "This Week."

Kyl, meanwhile, said on "Fox News Sunday" that Republicans want to change the tax code in an effort to lower rates, eliminate loopholes and possibly increase revenue, but not as part of the deficit reduction deal being negotiated now.

"What we've said is we're perfectly willing to consider those kinds of issues in the context of tax reform, which we would very much like to do," Kyl said. "But we're not going to have the time to do it or be able to do it in order just to raise revenue as part of the exercise, which should be about reducing spending."

At the heart of the GOP resistance is a bedrock principle pushed by anti-tax crusader Grover Norquist against any kind of tax increase at all. A pledge pushed by Norquist's group, Americans for Tax Reform, against any tax increases has been signed by more than 230 House members and 40 senators, almost all Republicans.

Norquist and his supporters want to shrink the federal government and believe any new revenue will enable continued government growth.

To Rep. James Clyburn, D-South Carolina, eliminating tax loopholes that benefit the wealthy and other steps to boost revenue are logical ways to help attack the deficit problem and make the tax system more fair.

"Now, the question is, how do you define a tax increase?" Clyburn said on ABC. "And I don't know of anybody who will define a tax increase as closing the loophole. If you tell me that my tax rate is going to be 30 or 35% and I come up with all kind of gimmicks with pretty smart lawyers and only pay 9%, there's something wrong with the loopholes in the law. We want to close those loopholes up. We do not want to raise anybody's tax rates."

Republicans are linking a deficit reduction deal to the separate need for Congress to raise the federal debt ceiling by August 2 or face possible default on some financial obligations.

To conservatives such as Sen. Jim DeMint, R-South Carolina, the debt ceiling must be accompanied by a combination of spending cuts, mandatory caps on future federal spending and a balanced budget amendment.

Otherwise, DeMint and other Tea Party favorites such as presidential candidate Rep. Michele Bachmann, R-Minnesota, say they will oppose increasing the debt ceiling by the $2.4 trillion requested by Obama to meet debt obligations through 2012.

Obama, Treasury Secretary Tim Geithner and economic analysts call such a stance dangerous, warning that market reaction to a potential U.S. default on its obligations could stall or reverse the fragile economic recovery so far.

However, Bachmann called such warnings "scare tactics" on Sunday, saying on the CBS program "Face the Nation" that the government takes in enough money to pay its debts while making spending cuts elsewhere, which conservatives want anyway.

"It would be very tough love," Bachmann conceded.