Congress pays $6.1 million in bonuses as it debates spending cuts 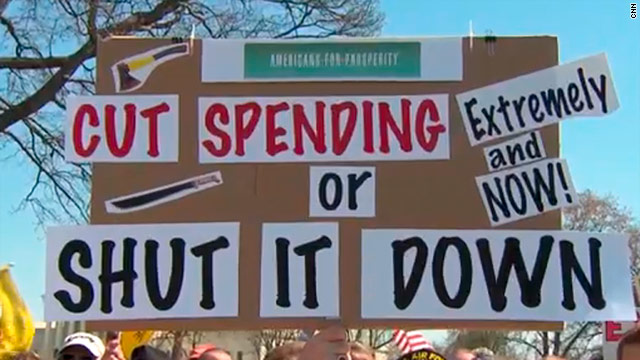 Washington (CNN) -- Members of the House of Representatives reported up to $6.1 million in staff bonuses between January and March, giving out bonuses as they debated spending cuts and came within minutes of shutting down government over fiscal problems, a CNN investigation has found.

At least one congressman gave thousands of dollars to his own staff as he criticized other federal workers as being overpaid.

The analysis came from a three-week look at the latest House expense report by CNN Radio's American Sauce, a podcast.

Members of both political parties reported bonuses, though Democrats outspent Republicans, with up to $3.1 million in staff bonuses compared with $908,000 for GOP members. The remaining $2.1 million CNN found was disbursed by committees. Committee spokesmen did not respond or were not able to delineate between Democratic and Republican staff members.

Staff bonuses are not a new phenomenon on Capitol Hill, but only in the past year and a half have salaries and other House expenses been released in a single online report.

The bonuses come as lawmakers on all sides demand spending cuts and belt-tightening from government. The millions in bonuses are a tiny fraction of the roughly $1.5 trillion deficit, but are a symbol of congressional spending at a time of economic struggle.

"These are congressional staffers getting bonuses while a lot of the constituents of the lawmakers are actually looking for jobs," said Steve Ellis, vice president of Taxpayers for Common Sense.

The bonuses came from an annual budget each member of Congress is given for staff, office space, travel and supplies. That allowance averages $1.5 million per year per office and is one of the few areas where each lawmaker has complete authority. Members must follow certain guidelines, but otherwise can spend their office budgets as they like. Any unspent money stays in the Treasury and keeps the deficit at a lower level.

The CNN analysis of thousands of pages of expenses shows members gave widely-ranging amounts of bonuses in the past few months, from under a hundred dollars per staffer up to $16,000 and $17,000 a piece.

Watchdog groups say that wide disparity and the fact that members are not required to justify any of the bonuses add to the questions.

"Lawmakers have to be very judicious about how they use the bonuses and they can't just be writing checks willy-nilly," said Ellis, "That's not to say that staff should not be compensated for their work, they do hard work, they work long hours."

And if the bonuses are in the millions? Ellis responded, "Then you have to be questioning is this a good use of the taxpayers money."

CNN contacted over 115 congressional offices to clarify and get responses. Just over half returned requests. Of those, some pointed out that expenses which may have looked like bonuses were deferred salary or accrued leave. Such items were taken off CNN's list.

But many others confirmed that the expenses were bonuses and defended them.

Rep. Jim Clyburn, D-South Carolina, served as majority whip for four years when Democrats controlled the House. On January first and second of this year, immediately before Republicans took over, he gave out some $79,000 in bonuses to his leadership staff.

In a statement, Clyburn wrote: "My staff worked extremely hard, spending very long hours on the Hill including quite a few all-nighters and many weekends. I was fortunate to have a dedicated staff, and I rewarded them with an end-of-the-year bonus that came from the remaining unspent funds allocated to my office."

A few members were unsure if they had given bonuses or not. When asked about seeming bonus payments he reported for January through March, Tea Party Caucus member Rep. Paul Broun, R-Georgia, told CNN, "I don't recall. I'd have to go back. It's been a long time ago." He referred CNN to his spokeswoman, who did not return repeated phone calls and e-mails.

"I think that for the most part, people work for very low wages, they work long hours and I think out of my staff I get very good service for the salaries they get," Foxx said.

According to the Sunlight Foundation, a watchdog group that pores over congressional expense data, top salaries go to chiefs of staff, who earn around $120,000 a year. But farther down the pay scale, the group says the average salary for a communications director is about $58,000; schedulers average about $41,000 and staff assistants bring in about $30,000 a year.

Daniel Schuman, an analyst for the Sunlight Foundation, says congressional staff salaries have been essentially frozen for years and and many are well below the averages for similar work in the private sector. He says this is dangerous.

"The truth is, you get what you pay for," he said, "And congressional staff earn significantly less than their peers and often times that encourages them to go and become lobbyists and work elsewhere where they can earn more money."

But if congressional staff is underpaid, why not just increase salaries? Why the millions in bonuses?

In fact, some members of Congress who gave bonuses have railed publicly against federal worker pay. Rep. Dennis Ross, R-Florida, held a hearing on the subject in March and opened with a strong statement, saying, "Our taxpayers can no longer be asked to foot the bill for these federal employees while watching their own salaries remain flat and their benefits erode."

But as he criticized federal workers as being overpaid, Ross reported $8,750 in what looks like bonuses to his own personal office staff. His office on Monday confirmed the bonuses, saying Ross gives them regularly but that the latest amount was higher than usual.