Number of Americans in same-sex marriage states more than doubles 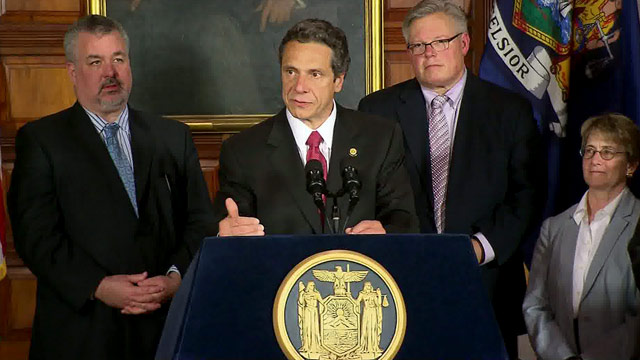 Albany, New York (CNN) -- The number of Americans living in states covered by same-sex marriage laws has more than doubled after New York Gov. Andrew Cuomo signed a bill into law that gave gay and lesbian couples the right to marry.

Cuomo signed the measure after it passed a Republican-controlled Senate on Friday night, raising questions as to whether the move reflects new momentum in the gay rights movement.

Cuomo said the law will grant same-sex couples equal rights to marry "as well as hundreds of rights, benefits and protections that are currently limited to married couples of the opposite sex."

A few of those are the right of inheritance, employer health benefits and a host of state tax benefits.

That will not include Social Security benefits through a spouse, because that is a federal benefit.

The controversial law passed by a narrow 33-to-29 vote -- a first for a GOP-led state Senate -- making New York the sixth state in the union to legalize same-sex marriage.

But the decision also drew a sharp rebuke from opponents, who spent millions to try to defeat the measure.

Opponents of the marriage equality law have vowed to take political action against any Republican who voted for the bill.

New York, which gave birth to the gay rights movement in the 1960s, will become the sixth state to allow same-sex marriages. Currently, Massachusetts, Connecticut, Iowa, Vermont and New Hampshire and the District of Columbia grant same-sex marriage licenses.

The Senate vote came after days of delays that included last-minute negotiations, passing by a slim margin with the support of four Republicans.

Cuomo credited four Republican senators who joined the majority of the state's Senate Democrats for the passage of the bill -- which is to take effect in 30 days -- saying they were "people of courage."

"I think it was politically more dangerous for a Republican," Cuomo told reporters late Friday. "The conservative party was threatening them with consequences ... and they did it anyway."

A vote on the measure, which the Assembly passed June 15, had been stalled in the Senate. But it turned a corner late Friday, according to Senate Majority Leader Dean Skelos, after lawmakers agreed on an amendment to protect religious groups from litigation that had been pushed by Republicans.

The Assembly passed a new version of the bill that included the amendment about religious institutions.

New York Mayor Michael Bloomberg, who courted Republicans to approve the bill, called the vote a "historic triumph for equality and freedom."

"In recent weeks, I have had many conversations with our state senators. I emphasized that not only is marriage equality consistent with bedrock American principles, but it is also consistent with bedrock Republican Party principles of liberty and freedom -- and the Republicans who stood up today for those principles will long be remembered for their courage, foresight, and wisdom. In fact, 10 or 20 or 30 years from now, I believe they will look back at this vote as one of their finest, proudest moments," Bloomberg said in a statement released shortly after the vote.