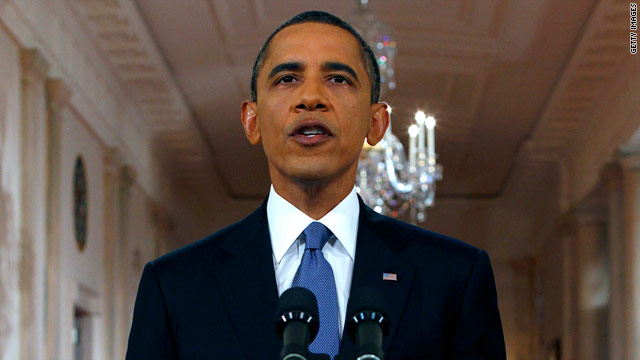 Washington (CNN) -- Top military commanders told members of Congress on Thursday that President Barack Obama's scheduled withdrawal of 33,000 "surge" troops from Afghanistan by next summer is more "aggressive" than the Pentagon initially proposed.

But Adm. Mike Mullen, chairman of the Joint Chiefs of Staff, and Gen. David Petraeus, the top U.S. commander in Afghanistan, made it clear they will carry out the president's orders.

Obama's "decisions are more aggressive and incur more risk than I was originally prepared to accept," Mullen told members of the House Armed Services Committee. "No commander ever wants to sacrifice fighting power in the middle of a war. And no decision to demand that sacrifice is ever without risk."

Petraeus, nominated to be the new CIA director, told his confirmation hearing by the Senate Intelligence Committee that he will return to Afghanistan on Friday to begin implementing the timetable set by the president.

"The best step for our country, with the commander-in-chief having made the decision, is to execute that decision to the very best of our ability," Petraeus said.

In an exchange with Democratic Sen. Carl Levin of Michigan, Petraeus again conceded differences with Obama on the issue but said, "This is not something, I think, where one hangs up the uniform in protest or something like that."

He noted that over the next 15 months, when the 33,000 surge forces will leave Afghanistan, there will be 70,000 new Afghanistan security forces in place including soldiers, police, counterterrorism and other specialists.

Dialogue with the Taliban?

Obama talks to troops after announcement

Secretary of State Hillary Clinton, meanwhile, told the Senate Foreign Relations Committee that Obama "hit the mark" with his decision.

"The bottom line ... is that we have broken the Taliban's momentum, so we do begin this drawdown from a position of strength," she said.

Administration officials have promised a full military withdrawal by the end of 2014.

In a nationally televised address Wednesday night, Obama said that the Afghanistan drawdown and the simultaneous winding down of the war in Iraq would help the United States begin to refocus attention and resources on efforts to resolve economic and other domestic problems.

The president took his message on the road Thursday, telling soldiers from the Army's 10th Mountain Division in Fort Drum, New York, that the U.S. military and its allies had "decimated" al Qaeda's ranks.

But the job "is not finished," he said. The drawdown of troops will not be done "precipitously," he vowed, saying it will be done in a way to ensure recent gains can be sustained.

"Your commander in chief has your back," he told the troops.

Mullen highlighted the fact that military commanders on the ground in Afghanistan will be given "the flexibility -- inside (Obama's) deadlines -- to determine the pace of this withdrawal, and the rearrangement of remaining forces inside the country."

How much progress after 10 years of war?

Mullen said, "Only the president, in the end, can really determine the acceptable level of risk we must take. I believe he has done so."

He also said the establishment of a clearer withdrawal timeline will force the government of Afghan President Hamid Karzai to become less dependent on U.S. forces and to take the lead in the fight against the Taliban and other extremist elements.

"There is no jumping ship here," he said. "This is the beginning -- not the end -- of our effort to wind down this war."

Regardless, key U.S. allies have seized on Obama's announcement as an opportunity to highlight their own withdrawal plans.

Afghanistan's Defense Ministry said Thursday it "respects the decision of the U.S. government and the U.S. people" and is ready to take up the slack as U.S. forces begin to pull out.

"Based on quantity and quality developments, the ... Afghan National Army is ready to cover the gap," the ministry said.

The Taliban called Obama's announcement "only ... a symbolic step which will never satisfy the war-weary international community or the American people."

"The assertion of American leaders about making headway in Afghanistan and Obama's proclamation of them being in a stronger position are nothing more than baseless claims and propaganda," the group said in a statement released Thursday.

The U.S. troop withdrawals from Afghanistan will begin next month, as Obama promised when he ordered the surge in a speech 18 months ago at the U.S. Military Academy at West Point, New York.

Obama's time frame will give U.S. commanders another two "fighting" seasons with the bulk of American forces still available for combat operations.

It also will bring the surge troops home before the 2012 election in which Obama will seek a second term.

On Capitol Hill, congressmen and senators in both parties are divided between those who want a faster withdrawal and others calling for caution in leaving Afghanistan.

Sen. John Kerry, D-Massachusetts, chairman of the Senate Foreign Relations Committee, indicated his agreement with the administration's decision, but said "no number of troops" will resolve Afghanistan's political problems.

Kerry called Afghanistan a "sideshow" compared to neighboring Pakistan, which has nuclear weapons and a "much more combustible brew" of extremist groups and individuals.

Sen. Richard Lugar of Indiana, the top Republican on the committee, appeared to agree with Kerry. Lugar told Clinton the war in Afghanistan has declined in terms of strategic importance, saying the United States should focus more on a growing threat in countries such as Pakistan and Yemen.

Obama needs to spell out clearly "a more narrow" definition of victory in Afghanistan, Lugar advised.

Clinton, in response, stressed the administration's diplomatic outreach to members of the Taliban. That process, she said, has not been "pleasant" but is "necessary."

The Taliban now faces a choice, Clinton said. "Be part of Afghanistan's future" or face "an unrelenting assault."

Clinton acknowledged the importance of Washington's relationship with Pakistan but highlighted the complexity of the diplomatic puzzle in the region. Among other things, she noted that Pakistan only wants to see Afghanistan's government strengthened and unified if Kabul is subservient to Islamabad's security interests.

But India -- Pakistan's historic rival -- will never agree to that outcome, she noted.

"It's all a zero-sum game with them," she said.

Republican presidential candidates have expressed reservations about the withdrawal strategy but differed in their reasoning.

"This decision should be based on conditions on the ground and success, not some vague notions of a responsible wind down and then jumping over what the real mission is now, which is stabilizing the security of the country."

Former Massachusetts Gov. Mitt Romney said in a statement, "We all want our troops to come home as soon as possible, but we shouldn't adhere to an arbitrary timetable on the withdrawal ( from Afghanistan). This decision should not be based on politics or economics."

In his statement, former Utah Gov. Jon Huntsman, who was Obama's ambassador to China until recently, called for shifting the Afghanistan mission to "a focused counterterror effort which requires significantly fewer boots on the ground than the president discussed tonight."