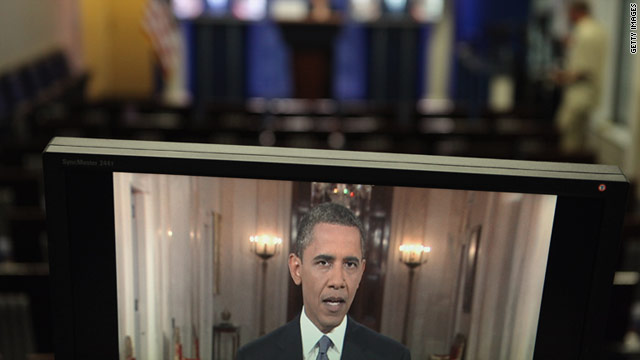 (CNN) -- President Barack Obama announced Wednesday night that all the 33,000 additional U.S. forces he ordered to Afghanistan in December 2009 will be home within 15 months.

At the same time, Obama said the drawdown would help the United States begin to refocus attention and resources on efforts to resolve economic and other problems and to unify a politically divided nation.

Here's how CNN analysts reacted to the address:

"Well, we've known [talks with the Taliban] have been going on for several months, but certainly as far as I can tell this is the first time the president sort of officially acknowledged it. Bob Gates did a few days ago. President Karzai was the person who kind of first outed it officially.

"I think it is a big deal that White House officials I spoke to said that they're aware of somewhere between 10 and 20 different what they call "leads" into the Taliban. They're sort of doing detective work is what they're saying, trying to work out if these leads, how legitimate are they.

"Is somebody coming forward as sort of a free agent who really doesn't represent senior leadership of the Taliban, or is it something deeper?

"They are saying they are not starry-eyed about these discussions with the Taliban. They don't expect some Treaty of Versailles or some peace agreement on the deck of the USS Missouri. But they are looking at sort of some leads that appear to be fairly substantial. That might lead to further negotiation. So I think this is newsworthy."

"This is a president who understands that 56% of the American public does not want to be in Afghanistan. And the White House advisers I spoke to today said to me, 'Look, if you go back to his speech in December of 2009, this is a president that people will view as steady.'

"Because he told us what he was going to do when he announced the surge in December 2009. And that is exactly what he has done. He is claiming some success in diminishing and defeating al Qaeda, obviously killing bin Laden helps him with that narrative.

"And so I think he believes it now. He can make the case to the American public that he can draw down having had some success.

"But given the fact that we're spending all this money on this war, that it is usually unpopular. I think it's very difficult to separate what is a military decision from what will become a political decision, you know? It's just -- it's all part and parcel of the same thing."

"And overall I thought that this speech did bring into focus -- it was a very good speech -- brought into focus his overall philosophy.

"You have to say he promised as a candidate early on in his presidency he would wind down the wars in Iraq and Afghanistan and try to do that successfully.

"And his White House aides were pointing out this afternoon when he came into office he had 196,000 troops deployed. By the end of this year we'll have less than 100,000. He is winding down. I think there's substantial disagreement on how he's winding down."

"I think it's in keeping with his basic strategic rationale from the start. He did announce the surge. Part of that was, I think, the military boxed him in. You remember [Gen.] Stan McChrystal leaked his recommendation. It became very difficult for a Democratic president to overturn it.

"It was a remarkable speech for an American president in the caution, the strategic emphasis, rather than the idealistic emphasis.

"He says things like, we must be as pragmatic as we are passionate, as strategic as we are resolute. People would have America overextend itself, confronting every evil that could be found abroad. This is reminiscent of a very different strain of America, in many ways, a strain that goes back before the Cold War."