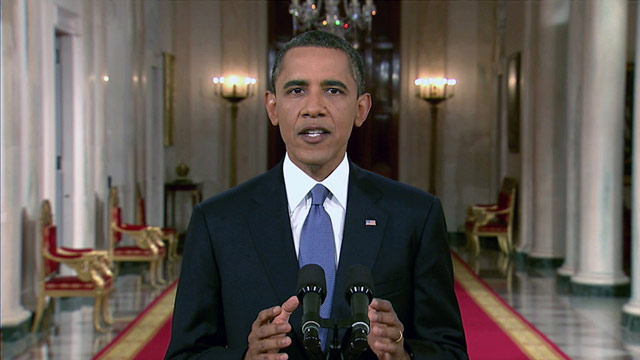 (CNN) -- President Barack Obama announced Wednesday night that all the 33,000 additional U.S. forces he ordered to Afghanistan in December 2009 would be home within the next 15 months. After the departure of all the surge forces, the total U.S. military deployment in Afghanistan would be just under 70,000 troops.

Excerpts of the reaction:

The defense ministry says "it respects the decision of the U.S. government and the U.S. people."

"The Afghanistan people will never forget the cooperation of U.S. forces in training and equipping Afghan forces. Based on quantity and quality developments, the ... Afghan National Army is ready to cover the gap."

The Taliban "considers this announcement which currently withdraws 10000 soldiers this year, only as a symbolic step which will never satisfy the war weary international community or the American people ... It must be clarified that the assertion of American leaders about making headway in Afghanistan and Obama's proclamation of them being in a stronger position are nothing more than baseless claims and propaganda. They have not gained progress in the battle field nor can they bring forth any proofs of this progress. The increase in troop levels since last year has only increased the loss in life and equipment on their side."

"I am pleased the president recognizes that success in Afghanistan is paramount. Continuing to degrade al Qaeda's capabilities in Afghanistan and the surrounding region must remain a top priority over any calendar dates. It's important that we retain the flexibility necessary to reconsider troop levels and respond to changes in the security environment should circumstances on the ground warrant. It is my hope that the president will continue to listen to our commanders on the ground as we move forward. Congress will hold the administration accountable for ensuring that the pace and scope of the drawdown does not undermine the progress we've made thus far."

"It has been the hope of many in Congress and across the country that the full drawdown of U.S. forces would happen sooner than the president laid out -- and we will continue to press for a better outcome. Concluding this war will enable us to reduce the deficit and focus fuller attention on the priorities of the American people: creating jobs and investing in our nation's future by building a strong, thriving economy for our children."

"Over the past 18 months our troops have made tremendous progress degrading the capability of the Taliban while enhancing the Afghan security forces. It is critical that we continue to aggressively prosecute that strategy. I support the president's decision because it provides our commanders with enough resources, time and, perhaps most importantly, flexibility to bring the surge to a successful conclusion."

"The president's decision represents a positive development, although in my view the conditions on the ground justify an even larger drawdown of U.S. troops this year than the president announced tonight. I will continue to advocate for an accelerated drawdown in the months ahead, and for enhanced training and partnering with Afghan forces, because only they can provide durable security for their nation."

"The drawdown of forces described by the president needs to be conducted in a manner that respects the professional judgment of our military commanders, preserves the security gains of the last year and allows for a slower pace of withdrawal if necessary. ... No timeline for withdrawal should be so inflexible that it squanders the sacrifice of the generation that responded to the call of duty after the attacks of September 11. Our country is indebted to them, their commander Gen. (David) Petraeus and the brave men and women of our intelligence community."

"Because I agree with President Obama that the surge in American troops to Afghanistan that he ordered in 2009 has enabled us and our allies to make great progress on the ground there, I am disappointed by the pace and timing of the withdrawal of those troops the president announced tonight. I had hoped the president would draw down our forces more cautiously and am therefore concerned that the accelerated withdrawal which the president has ordered will put at risk the substantial gains we have made in Afghanistan."

"I've spoken with President Obama and I welcome his decision. This decision is a result of the progress we have made in Afghanistan and it follows close consultations with NATO allies and partners. In December 2009, the United States took the bold decision to increase the number of American troops. Together those troops were a part of an international effort to turn the tides in Afghanistan. The Taliban is under pressure everywhere; the Afghan security forces are getting stronger every day. That's why we can gradually adapt our presence in Afghanistan. But beyond the end of our combat mission we will still have a partnership with Afghanistan; a partnership that will endure."

"Ten years ago, our country was viciously attacked and 3,000 innocent men, women and children were killed on 9-11. Afghanistan and the Taliban were providing safe haven for Osama Bin Laden and his terrorist network. Together with an outraged world, America launched 'Operation Enduring Freedom' to topple terrorism and keep our country safe. We must not forget why this all started. Allied forces must continue to hold on to the progress we've made as we turn over security to Afghan forces. I am pleased that President Obama is drawing down troops in a way that gives the commanders on the ground the resources, time and flexibility they need to react to the situation in the field while also bringing our brave men and women home."