Rick Perry: A governor who 'means what he says' 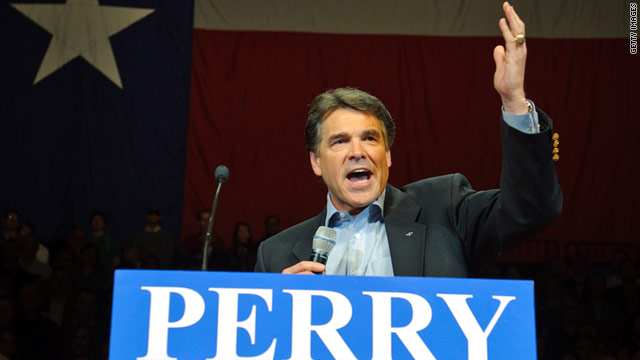 He began his political career in 1985 as state representative. He's the longest-serving governor in the U.S.
STORY HIGHLIGHTS

The Republican became the state's chief officer in 2000 when George W. Bush resigned as governor to assume the presidency. Perry, who was lieutenant governor at the time, assumed the role, successfully ran for office in 2002 and has remained there since.

The transition from Bush to Perry wasn't a difficult one. In some ways, they are nearly the same type of guy -- a devout Christian conservative who often blurs the line between politics and religion.

Perry declared a day in August a "Day of Prayer and Fasting." In a proclamation he wrote, "I invite my fellow Texans to join me on August 6 at Reliant Stadium in Houston, as we pray for unity and righteousness -- for this great state, this great nation and all mankind. I urge Americans of faith to pray on that day for the healing of our country, the rebuilding of our communities and the restoration of enduring values as our guiding force."

While his proclamation may seem out of place to some Americans, it sits pretty well in a state in the Bible Belt.

Jim Henson, director of the Texas Political Project at the University of Texas-Austin, said people there just "seem comfortable with him."

"I think in a lot of ways he's become by virtue of longevity and the way he's used the office as probably one of the most powerful governors in the history of the state," he said.

William Murchison, a conservative writer and Perry acquaintance, recently wrote in the conservative magazine American Spectator that Perry's personality and life story will help his chances on the national stage.

"My governor seems to mean what he says -- for many Republicans and independents, an immensely reassuring point," Murchison wrote on June 13 in an article titled, "My Governor, Rick Perry."

The article comes amid heavy speculation that Perry will likely join the field of Republicans vying to win the 2012 GOP presidential nomination.

His political views fit nicely with where the Republican Party and the Tea Party movement are today: pro-small government, anti-Obama economic policies.

In addition, speculation ramped up when top aides to Newt Gingrich's 2012 presidential campaign -- Rob Johnson and Dave Carney -- resigned. Carney is a long-time aide to the Texas governor. The two political operatives could very easily jump into a potential Perry 2012 campaign.

Mark Miner, Perry's communications director, told CNN it's understandable that many in the party want him to run, because Texas, with its business-friendly climate, weathered the recession better than most states -- including lower unemployment.

"He is a conservative, fiscally responsible governor that has a successful record," he said. "There is always going to be talk about he running for higher office because of success he has had."

Perry, 61, is a native of Paint Creek, a small farming community north of Abilene. A graduate of Texas A&M University, Perry joined the U.S. Air Force in 1972 and flew C-130 tactical cargo aircraft in Europe, the Middle East and the U.S. After leaving the Air Force, he returned to Paint Creek to farm with his father.

Perry married his childhood sweetheart, Anita, in 1982. They have two children.

He began his political career in 1985 as state representative in a rural West Texas district. In 1990, Perry became the state's Commissioner of Agriculture, serving two terms. He later successfully ran in 1998 for lieutenant governor. While governor, he served as the chairman of the Republican Governors Association.

His looks and demeanor have also helped Perry throughout his career, Murchinson writes.

"He's tall, lean, and good-looking. And very, very male, in case you were wondering. He makes a good speech."

And he certainly makes news -- for often odd reasons.

In August 2010, Perry shot and killed a coyote while jogging with his dog in Austin. Perry said he often carries a pistol on the trails because of snakes and other wildlife.

Murchison admits, though, that Perry's often "combative" style "may not prove as right for the moment as a style that says, calm down, I can fix this this, give me a chance."

And it's somewhat evident when it comes to the polls.

A May University of Texas/Texas Tribune poll showed the governor with a 42% approval rating -- 12% approved strongly and 29% approved somewhat.

His disapproval rating was the same -- but 28% disagreed strongly and 14% disagreed somewhat.

Henson, though, said while Texans are split, the rate has been consistent throughout his time as governor -- a position that doesn't hold as much power as other states' chief executives.

If he ran, Perry would be able to take his economic legislative record to voters worried about another Great Depression and the country's rising deficit.

"The truth is, because of that track record, he can focus instead, a lot of Republicans operatives think, on the economic message," said Jessica Yellin, CNN national correspondent.

Henson said the conclusion of the state's legislative session now gives Perry the chance to tout his economic credentials across the country.

"He can say. 'This is what we've done in Texas ... lower taxes and built a strong economy that is better than the rest of the country during the recession. We built the political culture of liberty and family values ... we actually cut spending, shrunk government and that's now why I offer the country. The Texas model.' "

Besides the history, Perry has geography on his side. He is the governor of a Southern state that holds a large number of electoral votes. His ties to the region would likely help him capture primary voters in key states such as South Carolina and Florida -- and even all the way up to Iowa.

But his conservative credentials may not sit well with independents in New Hampshire -- and those voting in the general election.

"Would his persona and policies travel well, from Atlantic to Pacific? That's the question," Murchison wrote. "It will just have to hang in the air a while longer, I'm afraid."

Henson agrees, saying the big questions are: Is he too conservative? Will he scare independents at the national level?

"I think a lot of that is going to depend on should he get the nomination, what's he going to look like on the ground in terms of the conditions that shape independents' responses," he said. "In a difficult economy, independents are going to be a little skeptical. But I think it's an open question on whether they'll be scared of Perry."

And that's what Democrats are banking on.

A Democratic strategist familiar with the Obama campaign's thinking told CNN that there is a "path of victory for him" when it comes to winning over Republican voters. But if Perry manages to win the nomination, the strategist said he would be haunted by his April 2009 suggestion that Texas might secede from the country.

"Texas is a unique place. When we came into the union in 1845, one of the issues was that we would be able to leave if we decided to do that," Perry said at the time. "My hope is that America and Washington in particular pays attention. We've got a great union. There's absolutely no reason to dissolve it. But if Washington continues to thumb their nose at the American public, who knows what may come of that. "

"I will say this slowly, for the benefit of liberal mediacrats whose brain cells freeze up whenever they listen to Texas conservatives: The. Governor. Was. Being. Funny," Murchison wrote.

Nonetheless, the Democrat strategist would make it an issue, saying it would "certainly be an interesting campaign, running against somebody who is running for president of the United States who had previously said he'd consider seceding from it."