Where does Anthony Weiner go from here? 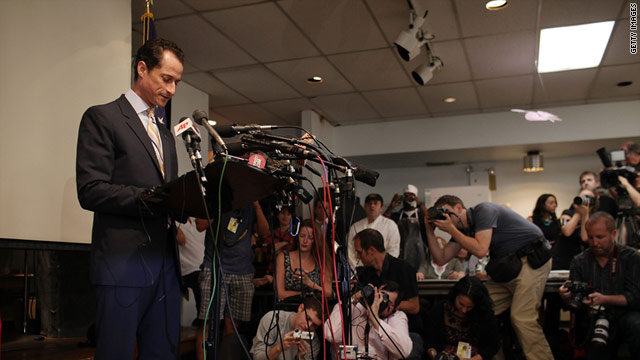 Dr. Drew on what's next for Weiner
STORY HIGHLIGHTS

His resignation on Thursday over a sexting scandal raises the question: What does he do now? At a press conference Thursday afternoon his answer was vague.

"I'll be looking for another way to contribute my talents," Weiner said at the packed news conference at a senior center in Brooklyn, New York. "I got into politics to help give voice to the many who simply did not have one."

What is known is that New York Gov. Andrew Cuomo, a Democrat, will call for a special election to fill Weiner's seat until the 2012 election. Weiner is a New York Democrat.

Spitzer: What Weiner should do next

But it has been reported that the state assembly might eliminate Weiner's Ninth District when it draws new district boundaries this year -- New York lost two House seats based on the 2010 census. The Ninth District encompasses parts of the New York boroughs of Brooklyn and Queens.

Weiner, who announced this weekend that he would take a leave of absence and seek treatment, has repeatedly said his focus was on repairing his relationship with his wife Huma Abedin -- a longtime aide to Secretary of State Hillary Clinton. The couple, married last year, is expecting their first child.

Abedin returned from an overseas trip with Clinton on Wednesday. Weiner said he wanted to talk to her after her return before he made a decision.

Colleagues said Weiner's first priority should be to get his life in order.

"There is life after Congress for Anthony Weiner and I hope he devotes himself to repairing the damage he caused to his personal life," U.S. Rep. Nita Lowey, D-New York, said in a statement Thursday.

Democratic Congressional Campaign Committee Chairman Steve Israel said Weiner's decision to resign is "right for him and his family, our party, and our country because we have serious work to do in Congress."

Earlier in the day, U.S. House Democratic Leader Nancy Pelosi of California refused to answer questions about Weiner during her regular weekly briefing on Thursday after news broke that Weiner would step down.

Pelosi, who last week called for an ethics investigation into the scandal, said she would issue a statement after Weiner's news conference.

Weiner ends where he began

Weiner also got advice from someone who has been in Abedin's shoes.

Dina Matos -- the former wife of ex-New Jersey Gov. Jim McGreevey, a Democrat who resigned after an affair with a man -- said in a statement: "Congressman Weiner's resignation is the first step in the healing and rebuilding process for his family.

"I hope that he will now focus on what is important for his family, especially his wife and their unborn child and that the public and media will respect their privacy. My thoughts and prayers are with his wife, during this very painful chapter in life."

As for that life out of the public eye? Others brought down by scandals have emerged as political commentators, strategists or lobbyists. Some have even run for office again, but most haven't been successful.

Weiner was considered a possible front-runner to succeed New York Mayor Michael Bloomberg in 2013. That aspiration, most observers say, is history.

Unlike most of his colleagues in Congress, Weiner's background is not in law or business, but pure politics.

He graduated from the State University of New York, Plattsburgh and worked as an aide to his mentor Sen. Chuck Schumer from 1985 to 1991. A year later, he was elected to the New York City Council. He was first elected to the House in 1998 when Schumer successfully ran for the Senate.

As he faced calls from Republicans and some Democrats to resign, Weiner said he would make the decision based on the will of his constituents.

A poll found that a majority of those in his district did not want him to resign, even though he admitted to sending lewd pictures to several women.

As more details of the scandal emerged, more Democrats, including Pelosi, joined the chorus of calls for him to step down, saying the story was causing a distraction.

His mentor Schumer said Tuesday that he was saddened by the news of Weiner's demise but stopped short of asking him to leave Congress.

"Those of us who have been friends with Anthony Weiner for a very long time feel his wrongful behavior is distressing, saddening and heartbreaking," Schumer said.

Schumer's statement came days after Weiner said he would seek a two-week leave of absence from the House in order to seek treatment.

Rep. Barney Frank, D-Massachusetts, who survived a scandal in the 1980s involving his relationship with a male prostitute who used Frank's apartment to carry out his business, was another top Democrat who did not call for Weiner's resignation.

"It's time for me to show a bit of a humility ... (and not) set myself up as the judge of others," Frank said.

The CNN Wire and Tonju Francois contributed to this report.