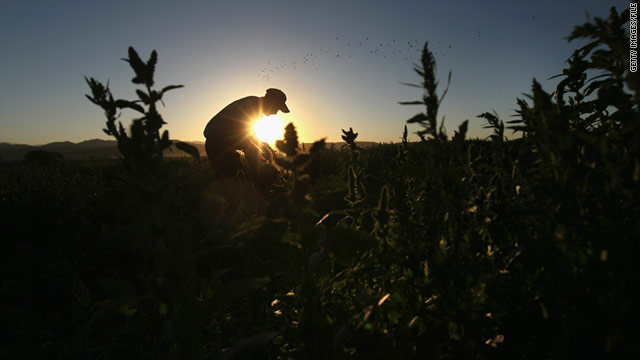 Atlanta (CNN) -- With Georgia's new law cracking down on illegal immigration only weeks away from going into effect, the state's governor proposed a new solution Tuesday for growers worried about labor shortages: hiring people on criminal probation.

Gov. Nathan Deal said in a statement Tuesday that he had asked the state's agriculture and corrections commissioners to connect unemployed probationers with farm jobs.

"I believe this would be a great partial solution to our current status as we continue to move towards sustainable results with the legal options available," he said.

Deal outlined results from a recent survey indicating there were more than 11,000 positions available on Georgia farms. Growers in Georgia have expressed concerns about labor shortages since Deal signed a law last month aimed at cracking down on illegal immigration.

The law, known as HB 87, allows police to ask about immigration status when questioning suspects in certain criminal investigations and asserts that workers convicted of using fake identification to get jobs could be sentenced to 15 years in prison and fined $250,000.

The law goes into effect July 1, but already some growers say they've noticed an impact.

Grower Roscoe Hutcheson said no one showed up Tuesday to pick blackberries at his farm in Baxley, Georgia -- a labor shortage he blamed on HB 87.

Late last month, growers reported they were getting only 30% to 50% of the workers they needed, according to the Georgia Fruit and Vegetable Growers Association, which represents mostly medium- and large-size operations in the state's $1.1 billion fruit and vegetable business.

Labor needs have diminished since then as the end of the harvest season approaches, but concerns from growers have not, said Charles Hall, the association's executive director.

"The information we're getting form harvesters is they (workers) don't want to come to Georgia because they're afraid of the enforcement of this law," he said.

Deal said about 25% of the 8,000 probationers in southwest Georgia -- where many of the state's farms are located -- are unemployed.

The farm job data stems from results of short, unscientific survey of 233 farms that Georgia Agriculture Commissioner Gary Black sent to Deal last week. His department is also leading a long-term study about Georgia's agriculture labor needs that must be submitted to lawmakers by January 1.

"Responses suggest a degree of unmet labor needs this season," Black wrote in a letter summarizing the survey.

The survey report did not mention the immigration law or provide an explanation of what was causing the labor shortage.

This week, several farms are scheduled to begin pilot programs to test out Deal's propsal of hiring people who are on probation, Hall said.

"We're hopeful that there will be some people who will try that. Then we can record the data and determine whether it's worth pursuing on a long-range basis," Black said.

"I don't think it's a total solution, but we're more than happy to have all the help we can get from the state of Georgia," Hall said.

But some growers say they're concerned that workers who are on probation won't be reliable or could put their farms at risk.

Hutcheson said he has three young children and doesn't want probationers working on his farm.

"I don't want bad people around my young'n's," he said.

Whether or not growers sign on to the proposal, Hall said they need a stronger long-term fix: a guest worker program to bring in laborers that are skilled at harvesting crops in hot weather.

"You can't necessarily just take somebody off the street and put them out there and they do a great job with harvesting," he said. "But we need harvesters right now, and growers are willing to do whatever they can to help and try to train people."

Black, the agriculture commissioner, also said the need for an improved guest worker program is clear.

"While we're going to be looking at what we can do at the state level, it's still incumbent upon our federal leaders to step up and help our farmers in this area," he said.