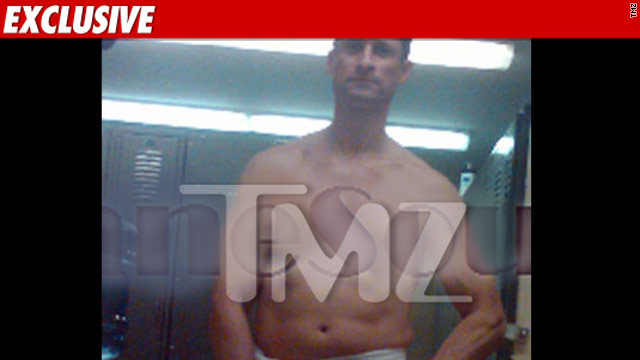 (CNN) -- The heads of both major political parties battled Sunday over the handling of Rep. Anthony Weiner's scandal, with the Republican Party boss accusing Democrats of inaction and the Democratic Party leader accusing Republicans of a "double standard."

In a heated debate on NBC's "Meet the Press," Republican National Committee Chairman Reince Priebus said that "for the first 10 days" of the scandal, "the only job (House Minority Leader) Nancy Pelosi was interested in saving was Anthony Weiner's." Democratic National Committee Chairwoman Debbie Wasserman Schultz fired back that Priebus' argument failed "the straight-face test."

The debate came the same day that TMZ published photos of Weiner, in various states of undress, which he apparently took of himself in a locker room. TMZ reported that they were taken in the House members' gym and sent to at least one woman. Weiner's office declined to comment on the photos, and CNN could not confirm the details reported by TMZ.

After apologizing last week, Weiner said he had exchanged "messages and photos of explicit nature with about six women in the last three years," communicating with them online and, occasionally, on the phone.

Wasserman Schultz issued a statement Saturday calling for Weiner's resignation. Pelosi also called for him to step down Saturday.

House Minority Whip Steny Hoyer said Sunday that Weiner should consider resigning. "I think that certainly he has to consider that option," Hoyer said on CBS' "Face the Nation." "I don't see how he can proceed and effectively represent his constituency."

In the interview on "Meet the Press," Wasserman Schultz was asked why she called for Weiner's resignation at this point in the so-called "sexting" scandal. She said Democrats had been giving Weiner "some breathing room to be able to be circumspect, do the right thing, make a decision, reach the conclusion that he needed to step back, and step down on his own." When he had not done so by Saturday, "it was important to weigh in," she said.

Priebus said "it's a question of leadership." Weiner "turned this town and this country into a three-ring circus," Priebus said.

"We've got leadership and a Democratic Party that are defending a guy that deserves no defense."

Wasserman Schultz said Priebus' argument "doesn't pass the straight-face test from a chair of a party none of whose leaders called for Senator Vitter, who actually broke the law, to resign, who is still serving (in) office." Sen. David Vitter, R-Louisiana, admitted in 2007 to "a very serious sin" after he was linked to a prostitution scandal.

Wasserman Schultz also cited former Sen. John Ensign, R-Nevada, who had an extramarital affair with a staffer's wife and later resigned. "You never called for his resignation, so it's a double standard and it's unacceptable," she said.

When asked about those situations, Priebus responded he was "not defending these guys," and turned the discussion to the economy and President Barack Obama's policies.

Wasserman Schultz said she spoke briefly with Weiner. She described him as "incredibly apologetic" and "devastated" about the conduct he has been engaged in.

Weiner's spokeswoman said Saturday that the congressman is seeking treatment "to focus on becoming a better husband and healthier person." He will take a "short leave of absence," Risa Heller said in a statement.

Wasserman Schultz said a leave of absence is not enough. A party cannot force a lawmaker to leave, however. "A member of Congress makes his own decision, and that's certainly going to be up to Anthony Weiner, but we have made it clear that he needs to resign," she said.

Speaking to the media on Saturday, Weiner said he has "made some serious mistakes and I'm trying to redeem myself," adding that his "remarkable" wife -- Huma Abedin, a senior aide to Secretary of State Hillary Clinton -- is doing well.

A Democratic source familiar with conversations among Weiner and Democratic leadership said the congressman does not want to make a decision on his future in Congress until Abedin returns from a trip with Clinton in Africa. She is scheduled to return Thursday.

Meanwhile, authorities in Delaware have closed an investigation into contact between Weiner and a teenager in the state.

C.R. McLeod, spokesman for the New Castle County government, told CNN on Sunday that the police concluded their investigation Friday "and at this point they won't have anything else to pursue unless further evidence comes to their attention."

In a statement Friday, New Castle County Police said detectives had "conducted an interview with the teen and she has made no disclosure of criminal activity nor inappropriate contact by the congressman."

Weiner told reporters the contact involved "nothing explicit, nothing indecent. Absolutely nothing inappropriate."

An attorney representing the teen's family said in a statement Sunday that the 17-year-old had Twitter contact with Weiner, and that the tweets "were not salacious or in any manner inappropriate." No photographs were ever sent to her, the statement said.