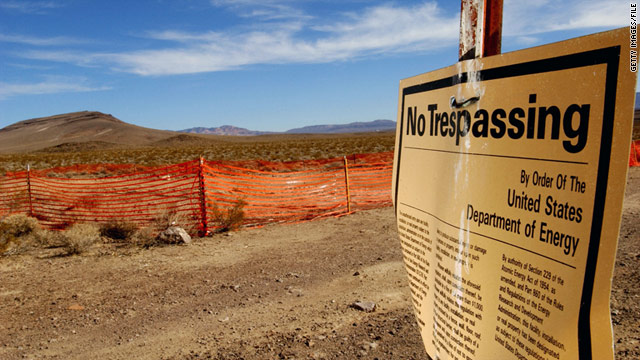 A "no trespassing" sign warns people to stay out of the Yucca Mountain, the proposed site to store nuclear waste.
STORY HIGHLIGHTS
RELATED TOPICS

Washington (CNN) -- Sixteen months ago, the Obama administration announced it was ending a controversial plan to store nuclear waste at Yucca Mountain, Nevada. The news flash -- like a flash in a distant fireworks show -- created very little noise.

Get ready for the bang.

Prior to his appointment to the NRC, Jaczko was a top aide to Senate Majority leader Harry Reid of Nevada. Reid had vowed that Yucca Mountain would never open.

Critics say that Jaczko (pronounced YAZ-koh) let politics trump science and took administrative actions that sped up the demise of the Yucca Mountain plan. They say he manipulated the process and misled some fellow commission members about the consequences of the actions they were taking.

Jaczko has denied any wrongdoing, saying he acted properly and responsibly, and that all commission chairmen sometimes must make difficult decisions.

For the most part, the controversy has been low-key. But it erupted last week with the release of an investigative report by Inspector General Hubert Bell, who will be the lead witness at Tuesday's hearing. Bell gave Congress a 46-page report into the Jaczko's handling of Yucca Mountain.

In a pre-emptive strike -- even before the report's public release this week -- Jaczko portrayed it as a vindication of his actions.

"The conclusions of the report reaffirm that my actions have been and remain consistent with established law, guidance, and my authorities as chairman," Jaczko wrote.

The Inspector General's report "confirms many of our worst fears," Shimkus said. Jaczko showed a "complete disregard" for science, and for the billions of dollars spent developing the Yucca Mountain project, he said.

"The report reveals a calculating and political NRC chairman who abused his authority, who sought to suppress scientific reports and withhold information from fellow commissioners -- strategically working to rig the system in a no-holds-barred effort to derail the Yucca Mountain repository," Shimkus said.

The report has fissile material for both sides.

It does conclude that Jaczko's actions were supported by the agency's top lawyer, that he acted within his budget authority, and consistent with the administration's decision to end the Yucca Mountain project. It also complied with White House guidance to spend agency money prudently, the report says.

But the report also concludes that Jaczko "was not forthcoming with other commissioners" about his intent to stop work on a Safety Evaluation Report, or SER -- the staff's evaluation of the project -- which some commissioners felt was necessary to memorialize the years of work put into the project in case it was revived.

Jaczko, anticipating that ending the project would be controversial, "strategically provided three of the four other commissioners with varying amounts of information" about his intentions, and did not provide any information to the fourth commissioner, the report concludes.

The report says Jaczko's direction to the staff to stop working on the SER is one of several factors that will prevent the NRC from complying with a law requiring the agency to issue a final ruling on Yucca Mountain.

According to the report, the chairman and other commissioners have equal responsibility and authority in all commission decisions and actions, and have full and equal actions pertaining to commission responsibilities. But the report says Jaczko acted like "the gatekeeper," determining what matters were administrative, and therefore under his purview, and which were policy matters that should come before the commission.

Jaczko "has established the practice of categorizing a matter as 'administrative' when it may have policy implications," one unnamed commissioner said, according to the report.

A "majority" of the commissioners' staff told investigators that Jaczko "withholds information to the commission by either suppressing papers or manipulating the agenda planning process because he controls the sequencing of papers to be presented to the commission for a vote."

Jaczko "defended his management style ... as necessary for efficiency and effectiveness," the report says.

Tuesday's hearing will be before the House Energy and Commerce's Subcommittee on Environment and the Economy.