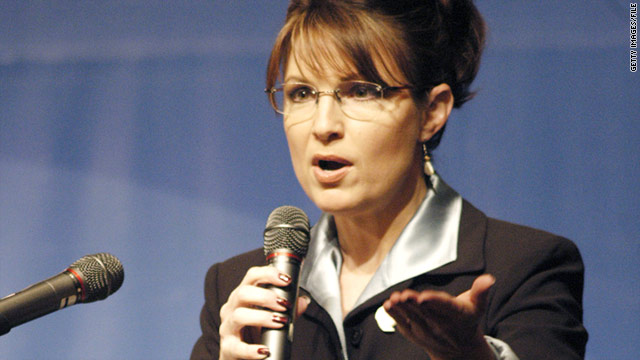 Alaska Gov. Sarah Palin speaks during the International Whaling Commission meeting in Anchorage, Alaska, in May 2007.

Juneau, Alaska (CNN) -- Some highlights from the 24,000 pages of e-mails from Sarah Palin's governorship, released Friday by Alaska state officials:

"Pls make sure we're getting state business announcements out to the public under my name as often as possible -- let Sharon and Bill know the importance of this thanks. Also, when you hear my speeches on the road that reference AK and/or our energy issues it's appropriate to do pressers on that bc we'd cover any other natl candidate's statements on AK-centric comments and references. Thanks"

"Frank Bailey just donated four boxes of brownie mix for the visiting football team's quick peek at the mansion Friday night. I will bake them myself ... so, no more controversy, it's clear the state isn't paying for the students' treat."

-- Palin, September 13, 2007, on complaints that she was favoring another high school team over Juneau's.

"Talis - pls have one of your folks draft a short letter to Exxon 'encouraging' them pay the $500mil ... we need to be on the record as telling them to pay up, end this thing, end this misery. Then we're doing a presser on it."

"Thanks! Can u believe they haven't agreed to end this thing?"

-- Palin, in a follow-up message

Why the heck would they choose to GROW an already bloated budget, esp going into reelections?

"Wonder how the Bitney replacement mention already got into the Ear. Sheeeesh -- I can trust people in this business as far as I can throw them ... another lesson for me that nothing is considered confidential to some folks, so fewer and fewer people should be brought in to 'think out loud' re: admin business."

-- Palin, August 26, 2007, referring to an item about staff changes in an Anchorage Daily News column

"Governor -- I received a call from Charles Adams, Communications Advisor Department for Senator McCain. Mr. Adams was inquiring as to whether or not you would be interested in participating in a National Press Call on Wednesday, 08.06.08. This would be with their National Pool of Reporters. It has very good attendance on calls. It would help the elected official. It would be a total of 15 minutes of your time and would be in regards to Energy. They do these National Press Calls each week. This is tentative at this time depending on your interest to participate."

"I could do this, time depending on the tentative Bethel trip?"

"Hi again - another head's up: If all goes according to (Track's!) plans, he'll be enlisting in the US Army, active duty, tomorrow. He doesn't want any publicity on this, tho it sounds like a Seattle media person already called bc [because] it may be that there aren't many, or any, US Govs who have a son recently enlisting. I warned him that the media may make a little deal out of it, but we don't desire such a thing bc Track is enlisting for his own right reasons and he's just anxious to go serve (without any publicity). And I'm proud of him for doing so. Thanks! And pray for mama's strength through this! :)"

-- Palin announcing her son's decision to join the military to top staff, September 10, 2007

"Marty/Joe: What came of the public messaging mission discussed two wks ago in my office re: our first committment [sic] to in-state use of our gas ... 'Putting Alaskans First'? I didn't see anything come out on that in the public. I ask bc now Sen. Stevens will be publicly testifying that that MUST be the top priority- I'm telling him that it is, but we haven't articulated that well enough (evidently), but that is my consistent committment and message: in-state use of our resource for Alaskans to be served."

"Someone recommended to me that we study the alaskan model of revenue distribution back to the citizens and get bills introduced in the state legislature in california florida and elsewhere that if they do go to offshore drilling they should split the revenue stream with a specified amount (maybe half) going to the citizens as a direct benefit.

"How much does each alaskan get?

"What share of the oil revenue goes to state government and what share would go to the citizens?

"Do you have an expert who could explain all this to me?

"Would you be interested in writing or talking about this?

"Recently I heard Governor Palin interviewed by Larry Kudlow on CNBC, and I think that she would make a first-rate running mate for Senator John McCain. What can we do to encourage Senator McCain to put her on the ticket? She is clearly a very winsome political leader. Congratulations to Alaska for choosing such a governor. Go Sarah!"

"Dear Governor Palin, We have heard of your daughter's current situation and would love to provide her with one of our wedding dresses for her wedding for free. We realize this is a personal matter, but we have many customers in the same situation."

"In addition to the many things the governor has already pointed out I think we should still let kyle know that Gov Palin has spend only $115 k on travel in 20 months -- nearly 2 years!! Vs. Murkowski's half million in his last 12 months in office!"

-- Palin aide Ivy Frye to the governor, July 10, 2008, after the Anchorage Daily News reported that the state had paid for one of Palin's daughters to accompany her on a trip.

"As usual I'm just hearing on the news of our troops being deployed (with ceremonies) to Afgh [Afghanistan] ... and Sean just asked if I'm going to funeral today for five of our soldiers -- I had to tell him I haven't been told of deployment nor funeral! Why doesn't McHugh [McHugh Pierre, spokesman for the state Department of Military and Veterans Affairs] let me know what's going on with "my" troops so I can help honor them?? I've asked repeatedly to be in the loop and it's unacceptable to still not be given info on military activities that I am expected, and should, be participating in. I usually see it on the news after-the-fact, and that's unacceptable."

"Guys, I may be pretty wimpy about this family stuff, but I feel like I'm at the breaking point with the hurtful gossip about my family that Sherry [Sherry Whitstine, an Alaska blogger] and others get away with. Bear with me. I hate this part of the job and many days I feel like it's not worth it when they have to put up with the hate that spews from people like Sherry, and there are others."