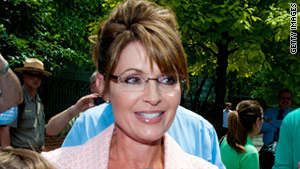 The document is one of the roughly 24,000 pages of records from Palin's administration released by Alaska state officials on Friday.

Allen had been the CEO of the Alaska oilfield services company VECO, and federal prosecutors accused him of leading a scheme to bribe top lawmakers in exchange for favorable state action.

The day after Allen's guilty plea, Palin sent e-mails to staffers asking for information on his ties to her predecessor, Frank Murkowski. Palin had beaten Murkowski in 2006 in a primary battle in which she campaigned as a reformer and backed an unsuccessful 2010 challenge to Murkowski's daughter, U.S. Sen. Lisa Murkowski.

Aides soon replied that VECO had paid $15,000 to fly Murkowski and Allen to a Council of State Governments meeting in Thailand in 2004. Palin aides also asked Allen to resign from a seat on a state board that cultivated ties with the Canadian province of Alberta, a request to which Allen -- who was later sentenced to three years in prison -- quickly agreed.

The document dump follows Freedom of Information Act requests filed by CNN and five other news agencies, filed shortly after Palin was tapped to be Sen. John McCain's GOP vice presidential running mate in 2008. She is now seen as a possible presidential candidate in 2012, and a spokesman for her political action committee said the records will show "a governor hard at work."

"The thousands upon thousands of emails released today show a very engaged Governor Sarah Palin being the CEO of her state," said Tim Crawford, treasurer of Sarah PAC.

Palin resigned in July 2009, about 2.5 years into her four-year term, complaining partly about a number of ethics complaints filed by her political opponents.