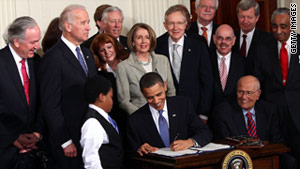 The health care reform legislation was signed into law by President Obama in March 2010.
STORY HIGHLIGHTS

A three-judge panel heard arguments in a massive lawsuit brought by Florida and 25 other states.

The 11th Circuit Court of Appeals was the latest of three similar federal panels across the country to hear challenges by states and private groups to the Patient Protection and Affordable Care Act. Separate rulings from those courts in coming months will form the basis of a certain appeal to the Supreme Court, which could offer the final word on the landmark legislation, perhaps in time for the 2012 election year.

The main issue was the law's so-called individual mandate, the requirement that most Americans purchase health insurance by 2014 or face severe financial penalties. Lawyers for the states said forcing people to buy a product like health insurance is unconstitutional and unprecedented.

"If we uphold the individual mandate in this case, are there any limits on congressional power?" asked Judge Joel Dubina, who was named to the bench by President George H.W. Bush. His daughter is a first-term GOP congresswoman from Alabama, Rep. Martha Dubina Roby.

The two other judges who heard the nearly 2 1/2 hours of arguments -- Judges Frank Hull and Stanley Marcus -- were also concerned the law went too far in mandating that states expand various Medicare health coverage requirements. Both judges were appointed by President Bill Clinton.

The case, Florida v. U.S. Department of Health and Human Services, was moved up from District Court after a judge in January declared key provisions of the health care law unconstitutional.

Initial arguments refocused attention on the issue of "coercion." Basically, the 26 states are arguing that the requirement that states expand Medicaid coverage amounts to compulsion and coercion of the states, in violation of the 10th Amendment to the U.S. Constitution.

The judges also heard arguments on "severability" -- whether the determination that one provision of the law is unconstitutional invalidates the entire act. District Court Judge Robert Vinson, who heard the case in January, ruled that the unconstitutionality of one individual mandate voided the entire piece of legislation.

The appellate court heard arguments regarding the individual mandate as well, but focused much of their time and attention on the issue of coercion.

Paul Clement, who argued for the state of Florida, said after the hearing, "We were very gratified that the court ... was very interested in the coercion arguments, and the fact that this is the most coercive statute ever passed, that really limits the ability of states to make a decision or not."

"Our attorney ... did an excellent job," the statement said. "The federal government could not rebut our argument that the individual mandate is an unprecedented intrusion on individual liberty. ... I am encouraged by the judge's response to our arguments that the health care law's Medicaid expansion unconstitutionally coerces the states by forcing them to assume billions in uncompensated Medicaid costs."

The parts of the law currently being administered include small-business tax credits, federal grants and consumer protection measures.

CNN's Kim Hutcherson and John Sepulvado contributed to this report.