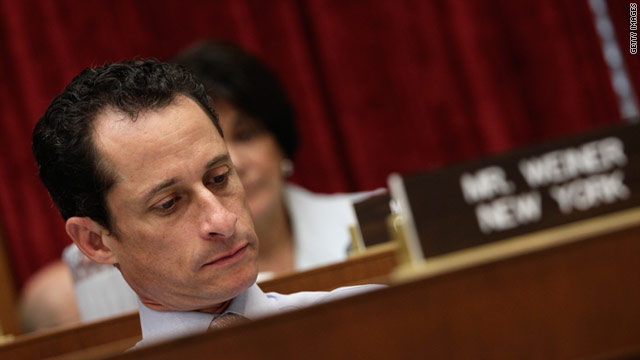 Washington (CNN) -- Although Senate Majority Leader Harry Reid said he has no advice for embattled Rep. Anthony Weiner, two prominent Democrats offered some guidance on how he might weather what one called a "perfect storm" of controversy.

"For Anthony Weiner, it's about showing true remorse and removing politics from the calculation," Democratic strategist Robert Zimmerman said. "He has to then not just worry about his constituents but worry about whether he'll have a district to run for."

He added that Weiner must focus on his work as a congressman and demonstrate a commitment to public service, not just politics and soundbites.

Weiner publicly apologized Monday for sending flirtatious messages on Facebook and Twitter to six women over the past three years and then lying about it for a week.

He faces an House Ethics Committee investigation, and leaders of both houses of Congress all but turned their back on him Tuesday.

"I wish there was some way I could defend him, but I can't," Reid, D-Nevada, said Tuesday. Asked what he would say if Weiner sought advice, Reid smiled and responded, "Call someone else."

House Majority Leader Eric Cantor said, "I certainly don't condone his activity, and I think he should resign," according to his spokesman.

Democratic strategist and CNN contributor James Carville said, "He's got a little bit of a perfect storm brewing against him.

Weiner: 'I'm not resigning, no'

Abrams: It's a matter of time for Weiner
RELATED TOPICS

"We're in a really, really terrible economic situation right now. That adds to his trouble," he said. "Number two, Congressman Weiner is a bright guy but never been that popular a member of the caucus, and he was going to leave the Congress to run for mayor of New York. They don't view him as one of their own, if you will."

Another factor that will hurt him? His wife's popularity.

Weiner's wife of less than a year, Huma Abedin, is a longtime aide to Hillary Clinton in the White House, Senate and State Department.

Zimmerman said that being immersed in the scandal is bad enough. But "to lie about it and harass the press makes it even more difficult to dig his way out of this."

Weiner said he had been hacked but then denied that and refused to answer questions from reporters about what he characterized as a "prank." He called a CNN producer a "jackass" when the producer interrupted him while reporters were questioning him.

The next day, he did a round of interviews in which he said that he didn't send the image but refused to say whether it was of him.

The seven-term had been considered a front-runner in the New York mayoral race in 2013. Carville says that dream is all but squandered -- at least with Democrats.

Carville -- who worked under President Clinton, a man who weathered his own sex scandal -- said people have done worse things and survived.

Nonetheless, the damage has been done.

Carville added that the whole controversy is a "huge distraction, and people say, 'Look at what these clowns are doing,' and it doesn't sit well with people."

"And when these congressmen go home, people start screaming at them at town meetings, and people are not happy in the country right now."