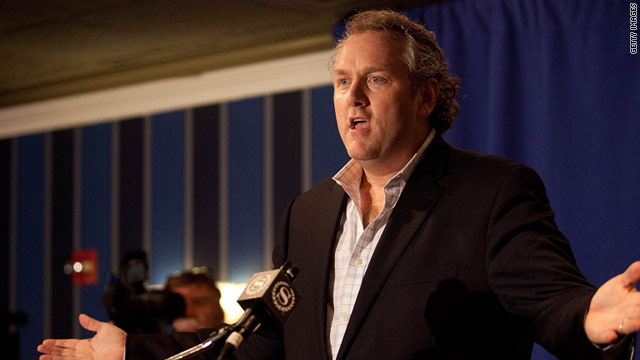 (CNN) -- Bare-chested photos that U.S. Rep. Anthony Weiner sent to a woman he met online had been the talk of Washington -- and, increasingly, the world -- for a week when the married Democrat finally scheduled a news conference to admit that he had sent the photos, then lied about doing it.

But before the shame-faced congressman arrived at the podium, another man took the microphone -- Weiner's nemesis: right-wing blogger Andrew Breitbart.

Breitbart was the first to post photos of Weiner on his website BigGovernment.com, one of a small empire of conservative outlets he runs online.

The photos, including one that showed a bulge in a pair of gray underpants, put Breitbart right where he likes to be -- at the center of a political storm, attacking the left.

"Andrew Breitbart has scratched and clawed his way into a position of immense power, not just in the conservative movement, but in the major media," Republican strategist Matt Mackowiak said Tuesday.

The conservative blogger has "withstood withering attacks and does everything with a single-minded focus on the truth," Mackowiak said, calling Breitbart "dead set in the middle of the conservative movement ideologically" and "a force to be reckoned with."

Blog: I'm not the 'cruel person' some think I am

The man who describes himself -- tongue only somewhat in cheek -- as a Righteously Indignant Senior Fellow at the Senior Fellow Institute of Senior Fellow Studies was a key player in mobilizing outrage against federal worker Shirley Sherrod and housing-rights group ACORN.

Breitbart was accused of misrepresenting Sherrod, and the Department of Agriculture later apologized to her and offered her her job back after she was forced to quit.

Breitbart got his start helping to run the original right-wing online media behemoth, the Drudge Report, then started his own website, Breitbart.tv.

Weiner: 'Don't know what I was thinking'
RELATED TOPICS

His regular appearances on FOX News, his websites and his speeches to conservative groups like the Tea Party have made him a star on the right, and a villain to the left.

Breitbart is "a propagandist and a charlatan and... a character assassin. He likes to pretend he's doing journalism, but it's not close. He knowingly publishes false information," Boehlert said last year.

But on Monday, Breitbart stood by his role in the Weiner scandal.

"Everything I've said so far has been proved true," he said of his stories about the congressman. "Give me one example of provable lie."

"We only wrote the story after a sitting congressman claimed that his computer system had been invaded by a hacker," Breitbart said, adding that he had received the photos via his website's "tip box."

And on Tuesday, he laughed when CNN asked if Weiner's confession and apology had been vindication.

He did not gloat, describing Weiner's appearance as "something that felt tragic and sad at every level."

Breitbart says he has other photos the congressman sent the woman, including one which he has not posted but says, "is extremely graphic, and leaves nothing to the imagination."

He told CNN he did not plan to release it, saying he was not "the cruel person that the media and certain people on the left think I am."

And he said he got the photos in the first place because people come to him with stories about Democrats to get around left-wing bias in the media.

On Monday he demanded an apology from the congressman for trying to blame him for the scandal.

"I'd like an apology from him," Breitbart said. "This was his strategy... to blame me for hacking. 'Oh don't worry, Breitbart's our regular whipping boy, we can accuse him of anything.' ...so I'm here for some vindication," Breitbart said.

Breitbart certainly has been accused of a range of misdeeds.

He posted a heavily edited, incomplete video of a speech by Sherrod, who is black, which implied that she refused to offer her full help to a white farmer. Sherrod was forced to resign.

She sued Breitbart for defamation and inflicting emotional distress.

He also posted video of a sting operation against the Association of Community Organizations for Reform Now, or ACORN, which showed conservative activists posing as a pimp and hooker seeking advice on how to set up a brothel.

The video prompted a groundswell of action against the organization, including a limited investigation by the U.S. Department of Justice and a slashing of funds from the federal government and several states.

ACORN also sued Breitbart. It went bankrupt in November and closed its doors.